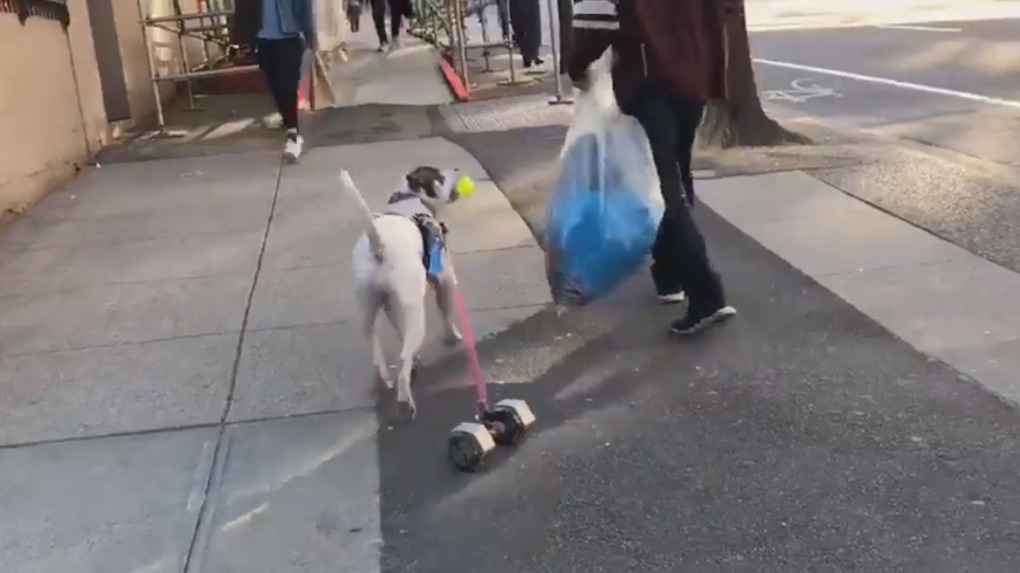 A dog tugs a dumbbell down the sidewalk in downtown Vancouver in a Twitter video posted last weekend. (Twitter/@lisarossington)

Video of a dog dragging a dumbbell down the sidewalk in downtown Vancouver has sparked outrage online, but police say there was no clear sign of abuse.

The short clip was posted on Twitter over the weekend, and shows the dog and owner walking near Abbott and Pender streets. The animal can be seen tugging a dumbbell that's attached to its body on some kind of leash or rope.

Some online commenters interpreted the situation as abusive, but Sgt. Jason Robillard said officers found no reason to arrest the owner.

"Officers determined that the dog was in good spirits and healthy," Robillard told CTV News in an email. "Members seized the dumbbell and the dog owner was allowed to go on his way with his dog."

The owner told police he was training the dog as a sled runner, and had tied the dumbbell to the animal as a training exercise.

Some social media users were skeptical about the explanation, and expressed concerns that the dog could injure itself yanking a heavy weight down the street. Others argued the dog seemed to be happily wagging its tail.

"People pay money to push weights around," one Twitter user wrote. "What's wrong (with) a dog doing it for exercise?"

Guy at Abbott & Pender #Vancouver forcing his dog to drag a dumbbell down the street. This is abuse. Thank you to the ⁦@VancouverPD⁩ and Const. Courtney for handling this in such a professional and patient manner ⁦@ChiefPalmer⁩ ⁦@BC_SPCA⁩ ⁦@CityNewsVAN⁩ pic.twitter.com/3hpLpJC8E2