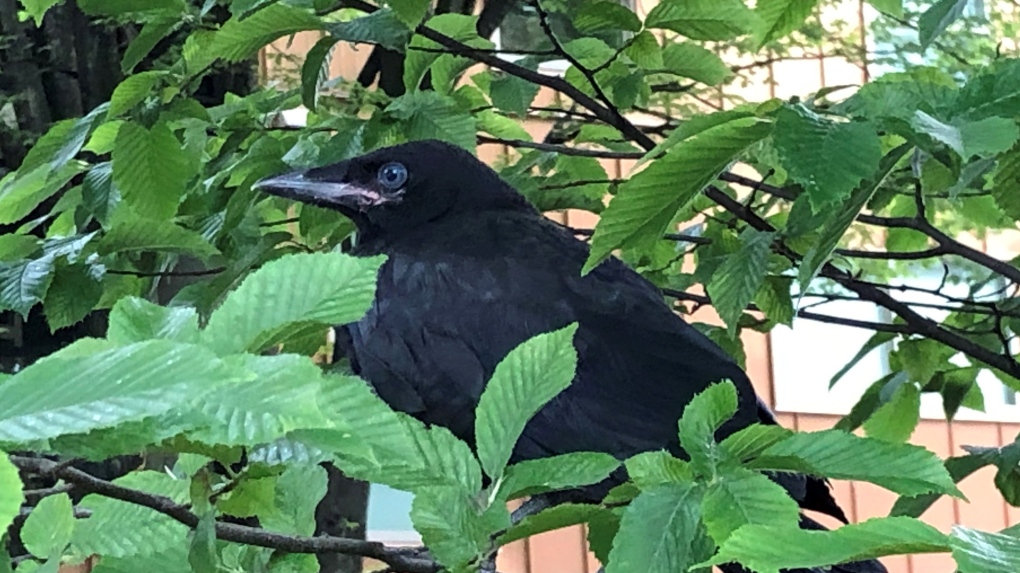 A young crow sits alone on a low tree branch in Vancouver in early June. Its parents could be heard cawing at anyone walking past. (CTV News/Tessa Vikander)
Vancouver -

It’s been a decade since former radio host Lynda Steele moved to Vancouver, and on Tuesday she was chosen for one of the city’s least enviable honours: two crows chose her out of a crowd and attacked her.

Late spring and early summer in Vancouver are sometimes referred to as “crow season,” because it’s when the cantankerous birds are raising their young. In an attempt to protect their nests, they swoop, dive bomb and caw incessantly at anyone or anything that they perceive as a threat.

Steele was walking on the Seawall in Yaletown when she was singled out from a crowd.

“I was just walking around with a big sea of other people, and all of a sudden -- whap -- on the back of the head!” Steele told CTV News Vancouver.

“I was shocked and then I felt it dig its claws into the top of my head and I thought ‘Oh my god, it's a crow.’”

The incident was so quick that she doesn’t know if anyone around her even noticed what was happening.

“I kind of recovered from that, and then in a split second, another crow hit me in the back of the head.”

Steele said she wasn’t walking in an area with a lot of large trees, where one might expect crows to nest.

“It was right on the main pathway on the seawall and so I'm not even sure where they came from, but they were stealthy and quick.”

Steele says she wasn’t injured, but was eager to get home and wash her hair.

“The reality is they’re just protecting their young and they will do that through July.”

Dubois says that to avoid crow attacks you can carry an umbrella and try to steer clear of their nesting areas.

Dubois did not speak specifically to Steele’s out-of-nowhere attack. However, she said that trying to be aware of your surroundings is an important safe-guard.

“You do have to be aware of your surroundings and know where they (the crows) are, if they are going to be coming near you," Dubois said.

“Sometimes we just go for a walk or a run, and we're not really paying attention to the wildlife around us and this is the time (of year) to do it, give them the space to make sure that we're not going to get into trouble.”

Steele says that the crows that attacked her came in quickly and she neither saw them coming or going.

“I was in an open place with tons of people around so those crows were coming for me, specifically for me, for some reason.”

Crows can recognize human faces and carry a grudge for many years, a fact that some Vancouverites know first hand. Speaking cheekily, Steele said she thinks the crows must have thought she was someone else.

“I think I was a victim of mistaken identity,” she said.