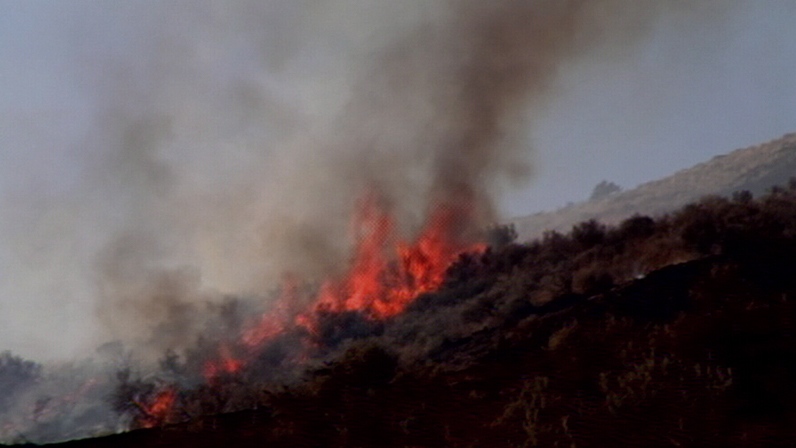 A large grass fire in Vernon threatened homes and a golf course on Tuesday, August 13, 2012. (CTV)

With temperatures in B.C. rising, the fire danger rating is climbing to high or extreme in the province’s south coast and southern interior. The latest wildfire in Vernon has been contained, but crews are warning there could be more.

The large grass fire that threatened homes and a golf course in Vernon beginning Tuesday was 70 per cent contained by Wednesday, according to fire fighters.

Vernon Fire Department Chief Jack Blair said the wildfire broke out at around 4 p.m on Tronson Road and quickly spread.

Within an hour the wildfire had consumed 36 hectares and flames were coming within metres of homes.

Crews were able to set up a guard between the homes and the fire overnight, allowing the return of residents who had been ordered out late Tuesday afternoon.

According to Kevin Skrepnek, a wildfire information officer, B.C. has experienced a quiet fire season, with a total of 270 fires consuming 1,000 hectares. But recent hot, dry conditions have pushed the fire rating in the Okanagan to high and extreme.

“We did experience lightning over July, now that it’s hot and dry we can experience hold over fires up to three weeks after lightning,” he said.

Blair said houses built on the mountainside are in particular danger, but the City of Vernon has been proactive in working with homeowners and developers to ensure houses are fire smart and less flammable.

Officials said the cause of the fire is still under investigation.