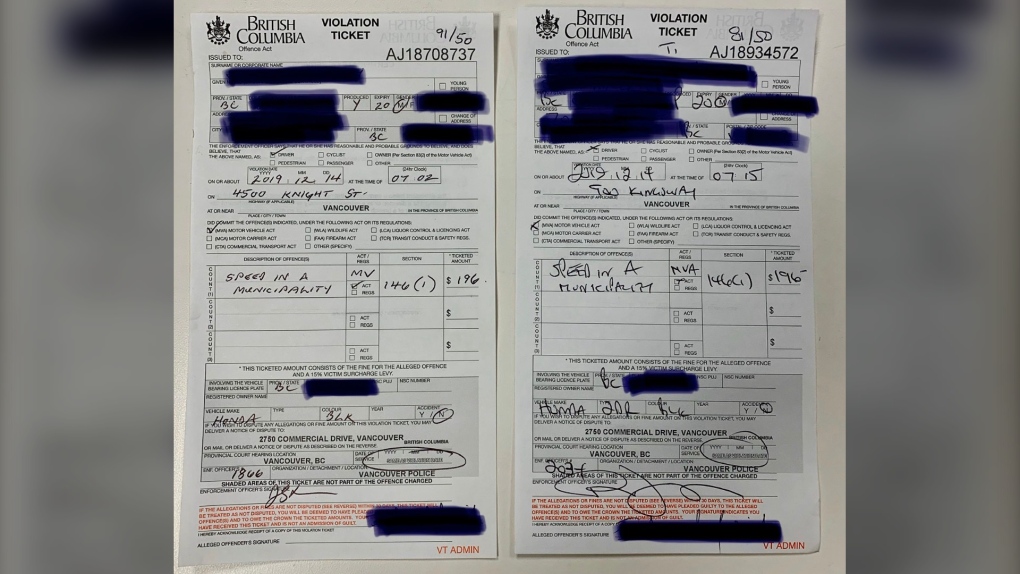 Vancouver police issued back-to-back speeding tickets to a single driver Saturday morning, all within a span of less than 15 minutes. (@baldguy1363/Twitter)

VANCOUVER -- Vancouver police issued back-to-back speeding tickets to a single driver Saturday morning, all within a span of less than 15 minutes.

A Vancouver police officer posted the two tickets side-by-side on Twitter Sunday morning, with information that could identify the driver blacked out.

"Just because you received a speeding ticket at one location doesn't mean you can't get a second one 13 minutes later at another location," the officer wrote.

Ladies and Gentlemen, just because you received a speeding ticket at 1 location, doesn’t mean you can’t get a 2nd one 13 mins later at another location! $396.00 and 6 points!

Both tickets are for violating section 146(1) of the provincial Motor Vehicle Act, which prohibits travelling faster than 50 km/h in a municipality.

The fines of $196 for each ticket correspond to the rate by which the driver was exceeding the speed limit. That's the penalty for travelling more than 20 km/h over the limit, but less than 40 km/h over.

The tickets indicate the driver was behind the wheel of a black, two-door Honda with a B.C. licence plate, and a spokesperson for the Vancouver Police Department confirmed the tickets' authenticity.