VANCOUVER -- Not long after they made national headlines for crowding local beaches and parks in the midst of a pandemic, Vancouverites are flocking to the city’s only cemetery for bike rides and family fun to the point the facility is asking them to leave mourners in peace.

Mountain View Cemetery’s manager says the past two weeks have seen such an influx of visitors running, playing and cycling on the grounds that they’re now erecting signs asking them to go elsewhere, reading “This space should not be used for leisure activities during these exceptional times.”

“It appears insensitive, and I don’t think that’s people’s intentions, but it’s really becoming a big concern,” said Glen Hodges. “The sheer volume of people coming now is really starting to rub up against our core purpose, which is a special place for people to honour and remember their dead.”

Hodges says sunny days have brought the biggest crowds and on Wednesday, a child barreling toward a burial site where a family was gathering for a funeral service wiped out on his scooter as the hearse arrived.

“People are walking on the phone and talking and right on the other side of the wall a family is there with our staff trying to have a quiet moment to place their loved ones’ remains in the wall and people are just oblivious, walking by unaware,” he said.

While CTV News was at the sprawling, multi-acre site in East Vancouver, we observed dozens of people running, or walking while on speakerphone, as clusters of small children cycled, a family played catch and a group of adults with dogs yelled greetings at each other.

Hodges says while many families have put funeral plans on hold in the wake of a provincial order banning gatherings of more than 50 people, the ones still holding services are having a particularly hard time doing so because only a handful of people are gathering to say their goodbyes.

Bracing for an influx

The city has two project managers preparing for a potential surge of burials if the rate of COVID-19 infections outstrips the ability of the province’s medical system to keep up with critically ill patients. While health officials are trying to source more ventilators and have started setting up a makeshift hospital at the convention centre, every country in the world is fighting over the same medical supplies and plans are in the works for a worst-case scenario.

While cremated remains can be interred at any time, the city’s funeral home has to make arrangements for casket burials, many of which are already postponed as grieving families wait for social distancing orders to be relaxed.

The 133-year-old cemetery had its busiest years in 1918 and 1919, when the Spanish Flu ravaged the globe and the city of Vancouver; it acquired an entire section of new land to accommodate the graves, many of which sit unmarked as families couldn’t afford the headstones.

Visitors welcome, if they have the right purpose

Hodges says he and his staff have grappled with the messaging for who should feel welcome at the cemetery, since they want it to be a place where everyone in the community can gather to remember lost friends an family and have discussions with their children about what it means to say goodbye.

“We’re the only cemetery in Vancouver and this is the only place where, if someone has someone buried here or a loved one they want to honour and remember here, they don’t have a choice. This is where they must come.” 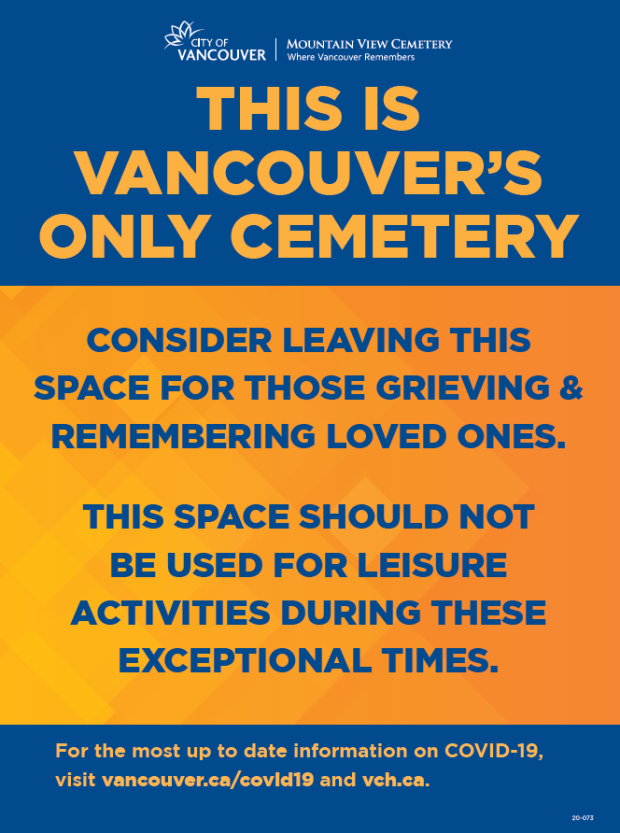