These orphaned kittens were found in a box in Maple Ridge 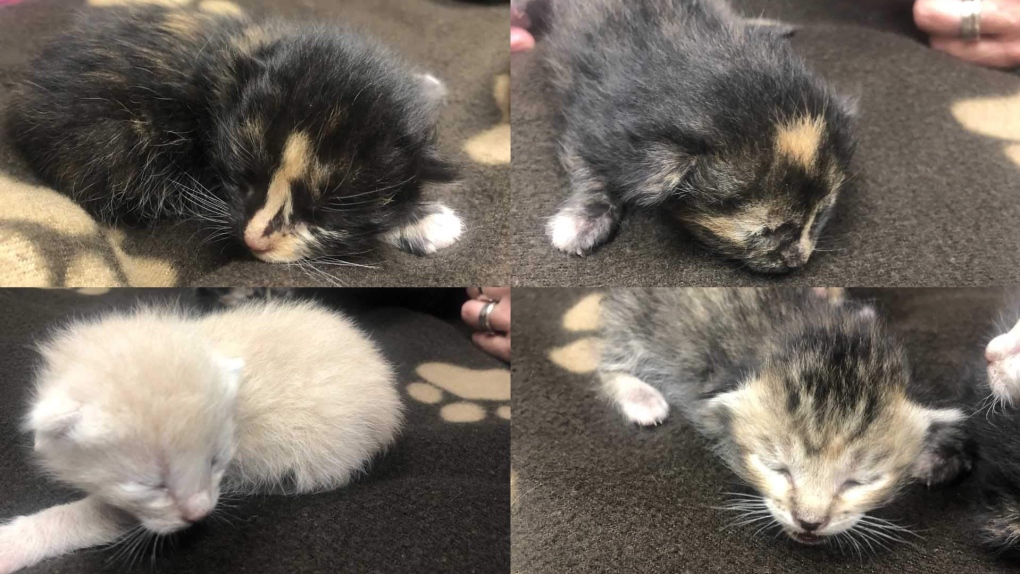 Four orphaned kittens rescued by the BC SPCA in Maple Ridge are seen in these images provided by the organization.

The BC SPCA’s Maple Ridge branch is asking for donations as it cares for four orphaned kittens found abandoned in an industrial part of the city.

According to the organization, the week-old kittens were discovered in a closed box on the centre median of 113B Avenue near Airport Way.

“The person who found these kittens was waiting for a nearby train to pass and had turned off the engine of his vehicle while he waited,” SPCA branch manager Krista Shaw said in a statement. “When the engine was off he heard the kittens crying in the box and rescued them.”

The animals were treated for fleas by a local vet. The SPCA said the three females and one male kitten were “extremely warm” from having been left outside, but appear to be doing well.

“Their eyes haven’t opened yet. They are very vocal and like to let us know when they are hungry,” Shaw said.

They’re now being bottle fed and have been placed in foster homes in pairs, but the SPCA still needs kitten nursing bottles, powdered replacement milk, Snuggle Safe heating pads, baby receiving blankets and monetary donations as it cares for the tiny orphans.

The organization said the kittens will be put up for adoption once they are eight weeks old.

In the meantime, donations can be made in person at 10235 Jackson Road in Maple Ridge.