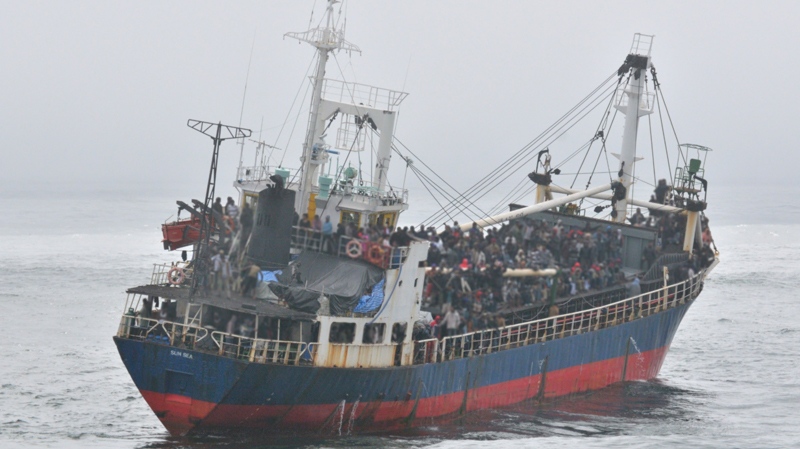 The MV Sun Sea is seen here in this image provided by the Department of National Defense.

A Sri Lankan national has been charged with organizing the voyage of a ship that brought 492 Tamil asylum seekers to B.C. nearly two years ago.

Thayakaran Markandu faces one charge of organizing entry into Canada under the Immigration and Refugee Protection Act in connection to the arrival of the MV Sun Sea on Vancouver Island in August 2010.

A Canada-wide warrant has been issued for Markandu's arrest, but Mounties believe he is living abroad. If convicted, he faces maximum penalties of life in prison and a $1 million fine.

"Obtaining enough evidence to have Mr. Markandu charged is an important step in holding those responsible for perpetrating this human smuggling scheme accountable, and demonstrates the dedication of border integrity investigators," RCMP Supt. Derek Simmonds of the B.C. Federal Border Integrity Program said in a release.

He added that Mounties are working with police around the world to locate Markandu and have him arrested and extradited to stand trial in Canada.

The men, women and children who arrived onboard the rusty and crowded MV Sun Sea all claimed to be fleeing persecution and violence in their native Sri Lanka following the brutal conclusion of two decades of civil war.

As of Jan. 20, 21 refugee claims have been completed, of which three people were accepted as refugees. Five claims were abandoned, while 13 were withdrawn by the claimant or because of deportation orders.

In all, 14 passengers on the MV Sun Sea have been ordered out of the country. The majority of refugee claim hearings are scheduled for the next few months.