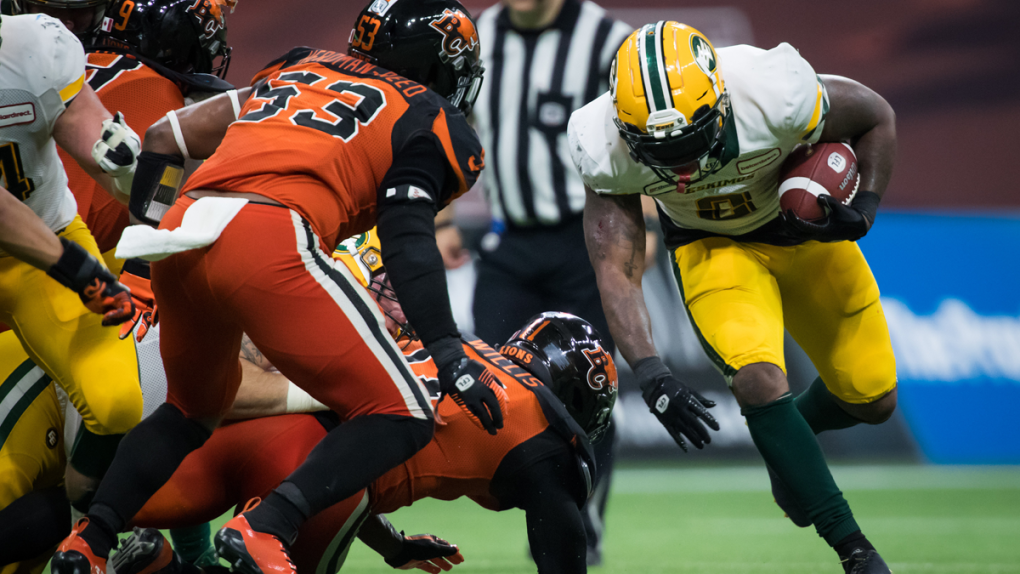 Edmonton Eskimos' C.J. Gable, right, runs with the ball before being stopped by B.C. Lions' Jordan Herdman-Reed (53) during second half CFL football action in Vancouver, on Thursday, July 11, 2019. (THE CANADIAN PRESS / Darryl Dyck)

The Lions suffered an ugly 33-6 drubbing at the hands of the Edmonton Eskimos on Thursday, in part because the seemingly absent offensive line could not protect quarterback Mike Reilly.

The former Eskimos star - who signed a $2.9-million, four-year deal with the Lions as a free agent in February - was sacked five times in the first half.

“The bottom line is we've got to protect the quarterback, no matter what it costs,” Claybrooks said after the loss. “We didn't bring in this Ferrari and then keep it in the garage and let it get dinged up by hail chips. We want to protect it like we're supposed to.”

Reilly threw for 157 yards and one interception on Thursday. He completed 17-of-26 attempts.

Sergio Castillo put up the Lions' (1-4) only points of the night with a pair of successful field goals, including a 52-yard kick in the first quarter.

The game was embarrassing, Reilly said.

“We got our asses kicked in all phases. It's definitely not the style of football we want to play and it's not something that anyone in this (locker) room can be proud of,” he said.

“Just getting physically man handled, all 12 guys on the field, offence, defence, special teams. It can't get worse than that. So it has to get better.”

Reilly was also hauled down seven times when the Eskimos beat the Lions 39-23 last month.

The defensive line is just doing its job by bringing the quarterback down, said Edmonton's Kwaku Boateng.

“I think our defence is programmed to attack the offence period,” the defensive lineman said. “It doesn't really matter who is holding the ball, who is carrying the ball, who is running with the ball. We have a whole bunch of dogs across the board. Our one and only goal is to get after who ever has the ball.”

Coach Jason Maas said his defence is a physical group that just gets after people.

“That's been our moniker all year. They are tenacious, all of them,” he said. “Our secondary is doing their job too, so it's making the quarterback hold it a bit. When he's doing that and our guys are efforting the way they are, good things happen.”

“Obviously we saw that in the first game, that they're relentless up front and they get after the quarterback,” he said. “And we've got to play more solid in there and we've just got to hold it together.”

The Eskimos offence also saw success on Thursday, with quarterback Trevor Harris throwing for 276 yards, and completing 22-of-28 attempts, including two touchdown passes. He also darted across the goal line to score a TD himself.

Edmonton's Sean Whyte made all four of his field-goal attempts, with the longest sailing 47-yards through the uprights.

Harris briefly left the game with less than a minute to play in the first half after taking a low hit from B.C.'s Odell Willis.

The defensive lineman was called for roughing the passer on the play, but the Lions challenged the penalty and the call was overturned on review.

“He gutted it out in the second half. He put another knee brace on and gutted through,” the coach said. “When one of your team leaders is willing to do that, put his body on the line, it says a lot of things. For him tonight that was tremendous.”

Despite Thursday's result, Claybrooks said he continues to believe that the Lions have what it takes to compete for the Grey Cup this season.

The Lions will visit Saskatchewan next Saturday for the first game in a home-and-home series with the Roughriders.

The Eskimos will battle the Alouettes in Montreal the same night.