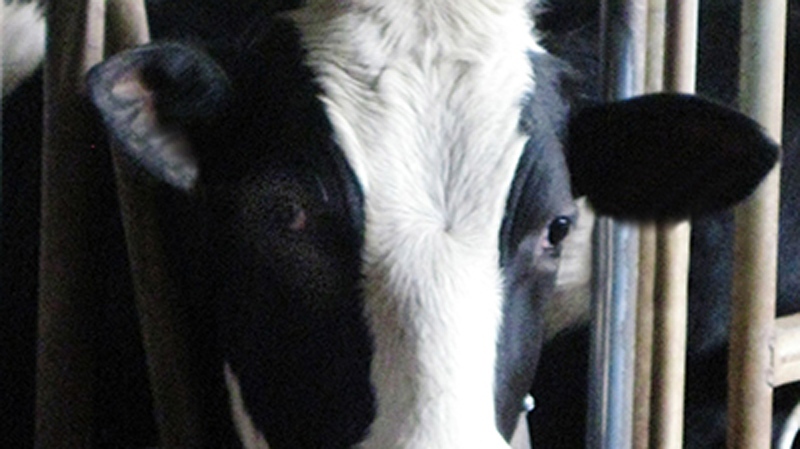 A dairy cow is seen in this undated handout image from the B.C. SPCA.
Vancouver -

A dairy farm in the Fraser Valley is being investigated for alleged animal cruelty, the B.C. SPCA revealed Thursday.

"We immediately attended the farm on an unannounced visit and are reviewing more than 300 video clips as we prepare our case to present to Crown counsel," Moriarty said.

The B.C. SPCA did not name the dairy farm at the centre of its investigation in its statement, but confirmed to CTV News that the farm in question is Cedar Valley Farms.

Earlier in the day, statements from the provincial government and the BC Milk Marketing Board had identified Cedar Valley as the subject of an SPCA investigation.

The board also announced that it had suspended the farm's dairy licence pending further investigation into violations of the Code of Practice for the Care and Handling of Dairy Cattle.

"Adherence to the Code of Practice for the Care and Handling of Dairy Cattle is mandatory for all dairy farms in B.C.," the board said in its release.

"We cannot overstate how important it is that all farms be held to a high standard for the handling of the animals in their care."

The B.C. SPCA did not reveal where the video recordings came from or provide a description of the alleged acts of animal cruelty.

The organization did stress that it considers the case a "high-priority investigation," and that it intends to recommend charges.

B.C. Minister of Agriculture, Food and Fisheries Lana Popham said in a statement that was "shocked and extremely disappointed" to learn of the allegations against Cedar Valley Farms.

"It is of utmost importance that these animals receive proper care," Popham said. "While an investigation is underway, I have asked the BC Milk Marketing Board to make sure a qualified observer has a presence on the farm to ensure there are no animal welfare issues or concerns."

"B.C. ranchers and livestock producers take great pride in the care they provide their animals and in their role as stewards of the land," the minister continued. "I believe the vast majority are meeting the standards in the code."

For its part, the B.C. SPCA says it has been lobbying the ministry for greater oversight of commercial farms.

B.C. SPCA CEO Craig Daniell said proactively auditing the thousands of commercial farms in the province is impossible given the non-profit organization's resources.

"The B.C. SPCA is extremely concerned about the lack of accountability on commercial farms and has reached out repeatedly to the provincial government and industry for more than a year about the need for a third-party auditing system," Daniell said in the SPCA's news release.

"Despite repeated calls for action, there has been none and animals are continuing to suffer."

One of the SPCA's recommendations is the implementation of video monitoring on commercial farms.