Semi-truck crash closes lanes of Hwy. 1 in Burnaby for hours 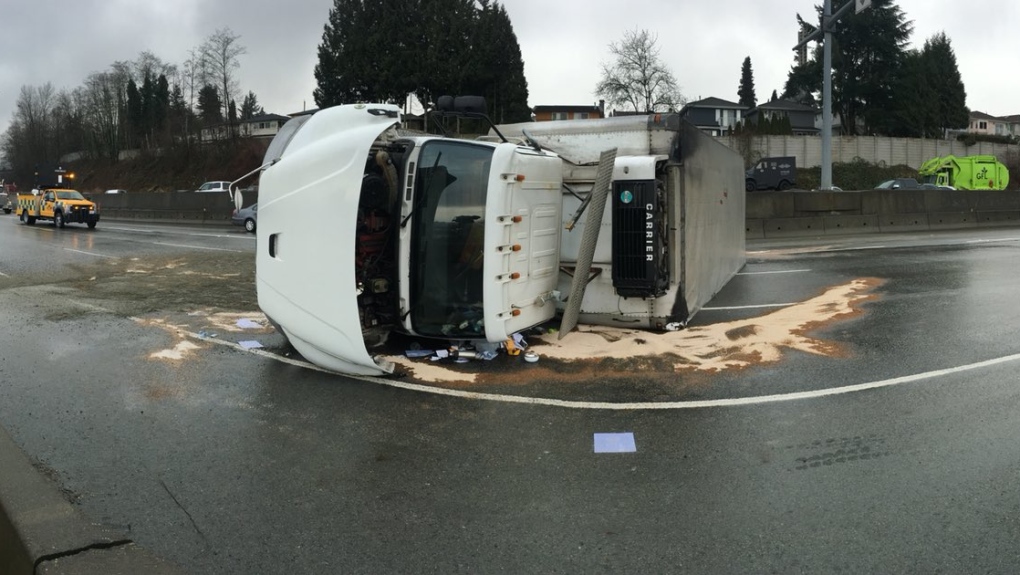 The westbound lanes of the Trans-Canada Highway were closed at Willingdon Avenue in Burnaby following a collision on Thursday, March 7, 2019. (Nic Amaya for CTV News Vancouver)

The westbound lanes of the Trans-Canada Highway were closed in Burnaby for hours following a collision.

Few details are known about the crash that occurred east of Willingdon around noon, but the Ministry of Transportation said three lanes were blocked as a result.

A photo from the scene showed a semi-truck on its side, splayed across the westbound lanes. As of 2 p.m., traffic was only getting through in the HOV lane.

By 3:30, DriveBC said the vehicle had been righted and was towed away. A sweeper truck cleared the road before the lanes could be reopened.

The cause of the crash is not yet known, but Mounties told CTV News that it was not believed to be weather-related.

Earlier in the day, officers advised those who rely on the route to expect major delays until the scene was cleared. Emergency crews were called in, but it appeared no one was seriously injured.

UPDATE - #BCHwy1 WB due to a vehicle incident east of Willingdon Ave. Emergency crews are on scene. Three lanes are blocked, only the HOV lane is getting by, vehicle recovery in progress. Drive with care and expect major delays.
#Burnaby #YVR pic.twitter.com/hLk4YT9UX7