Just how many British Columbians are actually in hospital with COVID-19 is a tightly-held secret, with few privy to the true number as health officials keep two sets of numbers: one public, the other internal.

In B.C., the health minister has said COVID-19 patients in intensive care units are removed from the tally when they’re no longer infectious with the virus. That policy is in place even though they may spend months in hospital struggling to survive their infection as they occupy scarce beds and medical resources.

CTV News has asked the Ministry of Health for the number of patients admitted to hospital for COVID-19 but not counted in the public figures, but has not received a response.

Internal documents from Vancouver Coastal Health describe the patients as “off precautions,” meaning extra steps to avoid being exposed to the virus are no longer necessary. As recently as July, the health authority was notifying a relatively wide circle of staff as to how many patients were in hospital but not part of the public hospitalization figures.

For example, on July 21, an internal memo documented 38 patients hospitalized in the health authority, 12 of them in critical care, and another 29 described as “current hospitalized off COVID precautions cases” with an accompanying chart.

Subsequent memos to staff have excluded the “off precautions” data in favour of a “new streamlined version of the report,” with very few medical personnel now aware of the true number of people still hospitalized due to the virus.

Royal Columbian Hospital, in the Fraser Health Authority, calls those cases “time cleared” and their head of medicine revealed they still have COVID-19 patients who were admitted during the third wave of the pandemic in the spring.

“(Time cleared patients) can no longer infect other individuals, their COVID has probably run through in terms of the infective period, but the aftereffects on their lungs and other organs are still there,” said Dr. Gerald Da Roza. “So they're still in our hospitals." 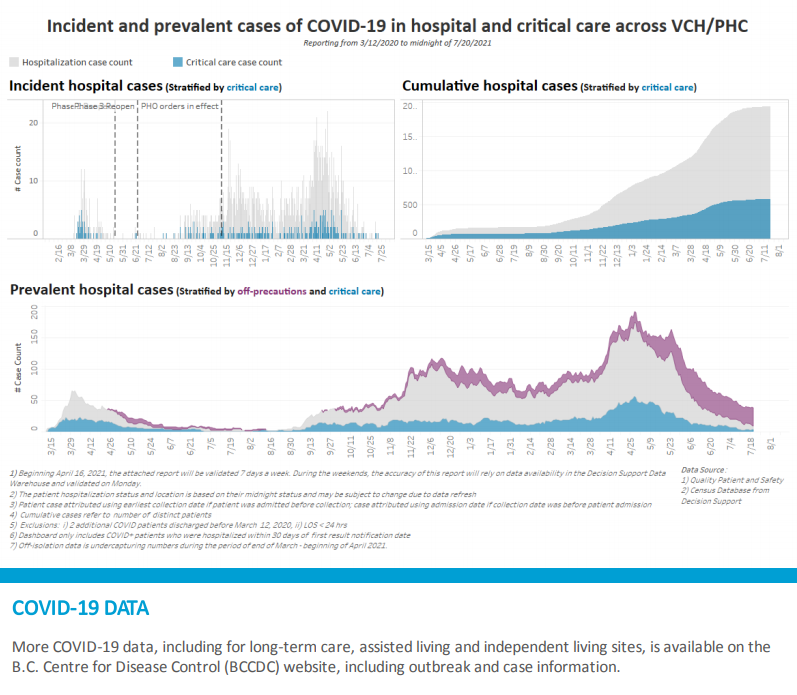 British Columbia’s top doctor sidestepped a direct question from CTV News about how many “off precaution” or “time cleared” patients there are in the province and why her administration isn’t being more transparent with statistics they track internally.

“What we present in our data is the epidemiologic numbers, and that's the way we've done it from the very beginning. It helps us understand severity of illness, that's the important thing from an epidemiologic perspective,” said Dr. Bonnie Henry. "Then there's the census information, which helps us look at health-care system impact on a day-to-day basis.”

CTV News asked the Ministry of Health to clarify Henry’s explanation with her, but the request was declined. We sent our first request for information about “time cleared” and “off precautions” patients Thursday and communications staffers have not replied, despite saying they were working on a response.

While British Columbians are kept in the dark when it comes to the true number of hospitalizations, Manitobans get the full picture daily.

Their public health officials publish a breakdown of cases as part of their COVID-19 update.

Premier John Horgan has said his province is “as transparent as any jurisdiction in North America,” but that claim is hard to square with health officials’ repeated withholding of information.

While publication of the true hospitalization numbers is unlikely to impact how the institutions manage the influx of COVID-19 patients amid a staffing crisis, it would help British Columbians understand why surgeries are being cancelled, assistance to virus-ravaged Alberta is impossible, why northern hospitals are sending critically-ill COVID patients across the province for care, and open their eyes to the possibility of a long-term hospital stay if they’re infected by the virus.

Sept. 22, 2021 update: Criticism of B.C.'s ICU reporting policy has been swift. Click here for more on the response from researchers and doctors.