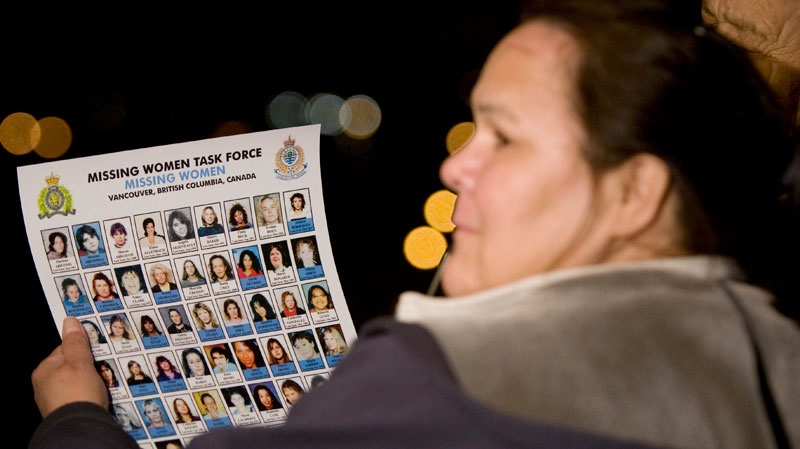 A woman holds up a poster of missing women outside the B.C. Supreme Court in New Westminster, B.C. Friday, Nov. 30, 2007. (Jonathan Hayward / THE CANADIAN PRESS)

Women in the sex trade have died around Bernie Williams as long as she can remember.

Her mother was murdered in 1977, her two older sisters were slain in the early 1980s. She remembers a close female relative vanishing as far back as the 1960s. Only nights ago, two more women she knew died.

With a strong, yet pained voice, Williams relayed her losses one after another Wednesday night to Wally Oppal, a former British Columbia attorney general and judge. Oppal is heading a public inquiry into the scores of women who were murdered and went missing in the province over the years around the turn of the millennium.

Williams isn't convinced it will do any good.

"We know it's not only about Pickton -- there's many Picktons that are out there," she told Oppal and more than 100 people who'd gathered in Vancouver's Downtown Eastside, the impoverished area from where scores of sex trade workers have disappeared over the past several decades, a portion known to have died at the hands of serial killer Robert Pickton.

"I don't trust this whole commission, I don't trust it," she said, as many in the crowd clapped their support.

Oppal held the forum as his first introduction of the Missing Women Commission to the Vancouver community most deeply wounded by violence against sex trade workers. He told those sitting in a large circular formation he was tasked by the province to look into the circumstances of the early police investigations into the missing women, why Pickton wasn't arrested earlier and whether policing changes can be made to prevent future murders.

The inquiry was called last fall after all appeals in Pickton's case were exhausted. He's now serving life in prison for the murder of six women.

Oppal said his mandate covers the years between 1997 and 2002, the period that ended with Pickton's arrest at his Port Coquitlam pig farm.

"Our purpose in coming here today is to engage with you," he said. "It is important that we hear from participants in the community, we want to hear from them, we want to know what went wrong and how we can prevent these wrongs from taking place in the future."

But like Williams, many of the 14 groups of people who stood to express their views argued the inquiry's scope is too limited.

Sue Davis, an active sex trade worker for the past 25 years and industry advocate, said she came face-to-face with Pickton in 1990 and tried to report three times that she'd been sexually assaulted and robbed at knifepoint.

"Nobody came and nobody took my report," she said. "These are only a few of the examples why the timeline should be expanded."

Davis told Oppal that probing only a five-year period won't allow the inquiry to recognize systemic biases that make women easy targets. Research indicates there was no recorded murders of sex trade workers prior to 1970, she noted.

Similar skepticism flowed from the other speakers, including Vancouver East MP Libby Davies, who's been involved in the issue as far back as the 1980s.

"What faith do I have that this inquiry will result in any change -- real change?" she asked, urging Oppal to include built-in mechanisms in his final report that will ensure his recommendations are actively followed up.

"We must compel you to issue a report that is, so to speak, bullet-proof, hard-hitting and will cause shockwaves as to what went wrong and why. Nothing less will do."

Other speakers at the forum included Vancouver city councillor Ellen Woodsworth, victims' rights lawyer Cameron Ward on behalf of several families, and Gladys Radek, who joined Williams from Walk 4 Justice. The advocates also raised concerns about the inadequacy of current prostitution laws and the failures of the law and public policy.

Williams stressed her hope Oppal will take a critical look at the initial missing women's task force, the joint RCMP-Vancouver Police Department that was created when authorities first decided there was a problem.

"I believe you will find all your answers there," she said. "It will fall like one big domino. Why did it take 69 (missing B.C.) women and over almost 4,000 women nationally (to begin)?"

A second forum will be held on Friday in Prince George, where greater emphasis will be placed on women who have vanished along the so-called Highway of Tears in northern B.C.

Oppal told those gathered that while he wants to hear the impact of the tragedies on their lives, the submissions would be used informally to help the commission create focus, rather than be included in his final report.

Oppal said he hopes the commission's formal inquiry will begin in June. He must deliver his final report by Dec. 31.