From a 13-hour delay notifying local government to an apparent lack of supervision at shorelines, the response to a massive oil spill in Vancouver’s English Bay has raised serious concerns from the public.

People walking along Sunset Beach on Thursday afternoon, nearly a full day after the toxic spill was first discovered, were horrified to see others in the ocean or even handling oil with their hands.

“There was a child swimming in the water earlier. That’s unacceptable,” A.J. Klein said. “There aren’t even signs, let alone the beach being closed down.”

The City of Vancouver initiated an emergency response, issuing a public warning and sending park board staff to monitor beaches on Thursday morning, but it potentially could have been launched much earlier if not for an apparent breakdown in communication.

A sailor first reported the spill to the Coast Guard around 5 p.m. Wednesday, but Vancouver wasn’t notified until around 6 a.m. the next morning.

The Coast Guard, the lead agency handling the response, said it alerted Port Metro Vancouver and the provincial government and expected one of them would contact Vancouver officials.

“Certainly it was not our intent to leave the city in the blind,” said Asst. Commissioner Roger Girouard. “We’ll have to look into exactly what happened. It wasn’t an intentional slight.”

The park board has since sent rangers to keep people and their pets out of the water, though some pedestrians said they were disappointed with what appeared to be a sparse number of staff around Vancouver’s seawall.

Coun. Geoff Meggs said the city provides another crucial function during emergencies via police and firefighters, as seen during the hazardous chemical fire at Port Metro Vancouver last month.

"We will want to find out more about the gap between the spill itself and the notification of our city resources,” Meggs said. “We really need very tight coordination.”

Roughly half of spill cleaned up

The Coast Guard signed a work order with Western Canada Marine Response Corporation on Wednesday night to get to work containing and cleaning the spill, believed to be either crude oil or bunker fuel.

Officials estimate about 2,800 litres of oil escaped into the bay – an admittedly rough approximation –and that 1,400 litres had been recovered by Thursday afternoon.

The source of the spill still hasn’t been confirmed but grain carrier the MV Marathassa has been identified as a suspect vessel, and surrounded by 2,600 feet of containment booms.

“Last night it was quite apparent that we had visually a bull’s eye, the team responded to that area,” said Girouard.

The Marathassa’s crew has been cautiously cooperative, Girouard added, but denies responsibility for the spill. If a source isn’t verified, the cost of the cleanup could have to be absorbed by the government.

“We have to work our way through that and you’ll understand there’s a number of agencies and probably one or two lawyers that are participating in that conversation,” Girouard said.

The potential environmental fallout also remains unclear, but beach and shoreline assessments are being conducted.

“These animals are very likely to die from acute poisoning,” Ross said. “That is a very thick oil that is problematic. It’s not good for these shoreline creatures.”

Danger to marine mammals such as porpoises, sea otters and even the endangered southern killer whale population is the primary concern, however.

“If they ingest it accidentally, if they get it in their eyes or their blowhole, or if they take it in and get it in their lungs, these are potentially devastating roots of injury,” Ross said.

Booming and skimming have limited effectiveness, he added, and it’s likely much of the oil won’t be collected.

The Aquarium warned that though animals are the most likely to be affected, humans should keep away as well. Ross said the oil is corrosive to touch and some of it will evaporate into the air, where it will become a breathing hazard.

Meggs said the city’s 311 line has been flooded with calls from Vancouver residents who want to help with the cleanup.

He also addressed the more widespread issue of tanker traffic increasing dramatically if Kinder Morgan is successful in a bid to expand the Trans Mountain Pipeline.

“Obviously it plays into the larger concern of how the port will handle future oil shipments, but today our focus today is really on making sure this one stays as small as possible and that the cleanup is as effective as possible,” he said.

NDP environment critic Spencer Chandler Herbert said though the spill doesn’t appear to have anything to do with oil tankers, it still shows how at risk B.C.’s coast is.

“If we consider what if it was a major oil spill or a diluted bitumen spill, which could sink in this water, it would be way worse,” Chandler Herbert said. “Our governments have admitted their ability to respond to spills is deeply lacking.”

The Coast Guard said it has set up an incident command post at Port Metro Vancouver, and is receiving response assistance from the port, Transport Canada, Environment Canada, the B.C. Ministry of Environment and the City of Vancouver.

B.C. had previously stated a need for improved oil spill preparedness when it issued its five conditions that need to be met before any major oil pipeline projects are approved.

Beaches are still open, but to be safe, you're encouraged to stay away from the water & the shoreline (wet sand). #VanFuelSpill 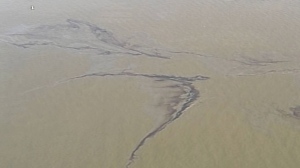