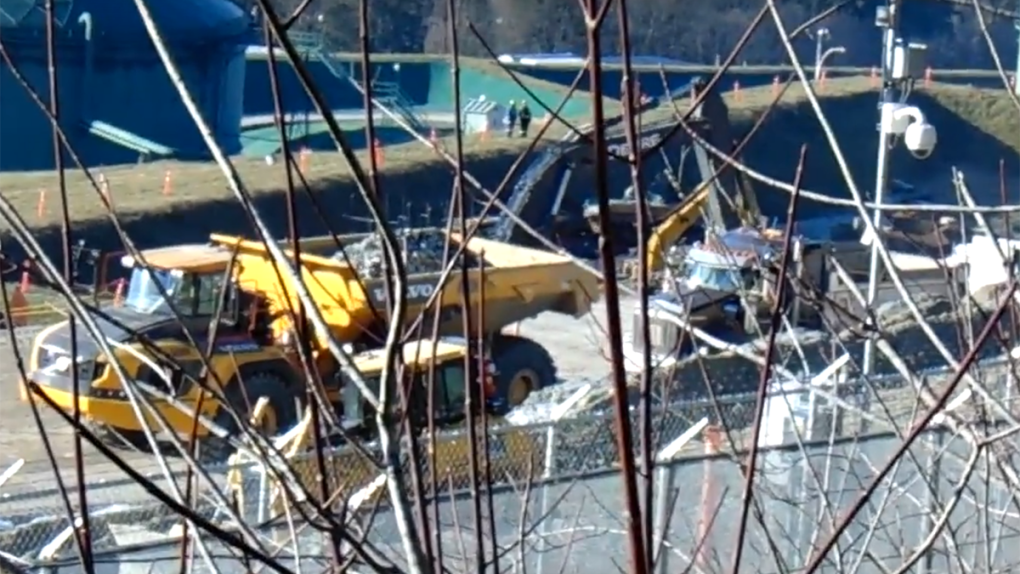 A still image from video submitted to CTV News shows a truck being filled with soil.

VANCOUVER -- People who live near a Trans Mountain site in Burnaby, B.C., say they're concerned by what they describe as a noticeable smell of oil as trucks cart off soil from the property.

Neighbours and others held a news conference Monday to voice their concerns that the earth being taken away may be "contaminated."

They said they started to notice the smell as the soil was removed, and were concerned by the amount removed from the tank farm.

One person said he saw about 30 trucks leaving the Westridge Marine Terminal within 30 minutes – each filled with soil.

The group said the soil was then being deposited at an industrial park in Port Coquitlam.

In a statement to CTV News Vancouver, a Trans Mountain spokesperson said the excess soil was being removed to make room for new infrastructure.

The company said it is following an environmental protection plan approved by the Canadian Energy Regulator.

"The EPP explains how soils are tested, handled and confirms Trans Mountain approved soil handling methods and facilities to accommodate the different types of soils," the spokesperson said.

In an email to CTV News Wednesday the province confirmed the soil was being moved to a facility in Port Coquitlam, and said that those involved do not require a permit to do so.

The B.C. environment ministry said it is aware of concerns raised by residents, and is looking into whether there is a risk to the environment or to human health.

"In order to ascertain the quality of the soil and its final destination, ministry staff have visited the site (Tuesday) and will also contact the company by phone," a spokesperson said.

No agreement has been submitted for the site, the ministry said.

The spokesperson also encouraged anyone with concerns about a possible violation of environmental protection laws to report it online.