$320M in government subsidies given to Trans Mountain in first half 2019: report 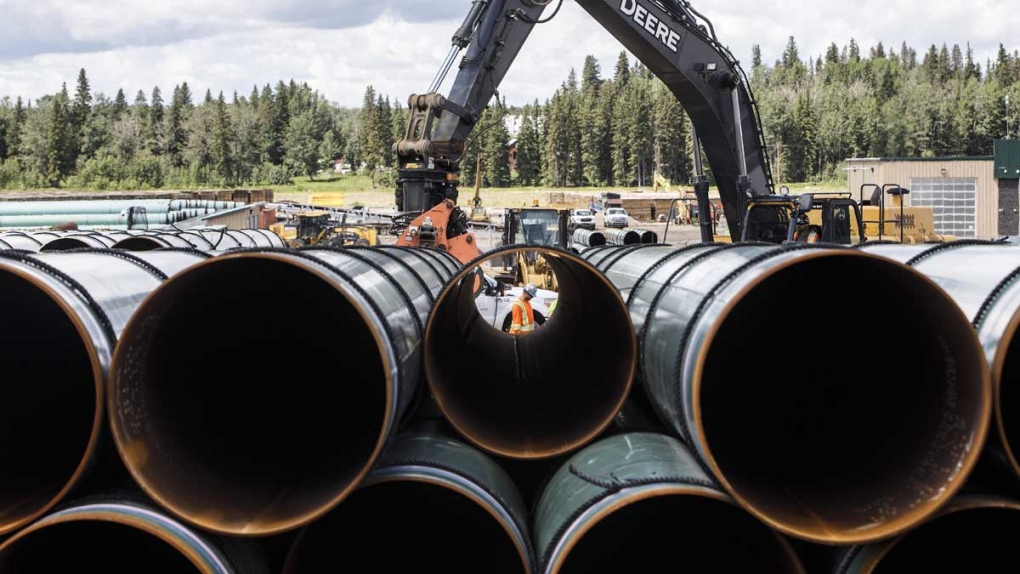 Pipe for the Trans Mountain pipeline is unloaded in Edson, Alta. on June 18, 2019. (THE CANADIAN PRESS / Jason Franson)

VANCOUVER - The Trans Mountain pipeline received $320 million in subsidies from the Canadian and Alberta governments in the first half of 2019, says a new report by an economic institute that analyzes environmental issues.

“This is a very large subsidy. It really does require more public discussion and public disclosure,” says Tom Sanzillo, the group's director of finance.

The document is public but presents a consolidated picture of the development corporation's finances, including revenues from the Canada Hibernia Holding Corp., which operates the Crown's interest in oil reserves off Newfoundland and Labrador.

“It's a good form of accounting. I'm not criticizing it. It just shouldn't be the only mechanism for showing the public how much money is being spent on this,” he says.

The Canada Hibernia Holding Corp. covered the interest on the equity investment for the first half of 2019, representing a direct subsidy of $46.3 million, the report says.

Trans Mountain posted a $10.9 million loss in this reporting period prior to taxes, the report says.

However, the loss is subsidized in the consolidated financial report by the Hibernia corporation's earnings, amounting to another $10.9-million direct subsidy, the report says.

Sanzillo also says the development corporation uses an “accounting gimmick” to obscure Trans Mountain's pension liability of $24.4 million. This is one more direct subsidy, he says.

Finally, the Alberta government reduced corporate taxes through a tax credit starting in January 2019. This policy action allowed Trans Mountain to save $54.1 million in taxes, yet another direct subsidy that the development corporation uses to turn the corporation's pre-tax loss into a post-tax gain, according to the report.

Sanzillo also identifies what he calls an indirect subsidy; the difference between the interest a private company would have charged Trans Mountain versus the rate charged by the Canadian government.

Canada's 4.7 per cent interest rate stands in contrast with the 12 to 15 per cent rate of return used by its former owner, Kinder Morgan, the report says.

Sanzillo used the lower figure, 12 per cent, to calculate that a private company would have charged Trans Mountain $302.1 million in interest in the first half of 2019. The Canadian government, meanwhile, charged it $118.3 million.

That amounts to an indirect subsidy of $183.8 million for the first six months of the year, according to the report.

The report authors acknowledge that the Canadian government does not have to adhere to commercial standards.

“(The report) is about transparency and not meant to be a legal challenge to the right of the Canadian government to subsidize the pipeline project. It is a matter of dollars at risk that the Canadian taxpayer might absorb,” it says.

When the authors added the $46.3-million interest payment and the $24.4-million pension expense back to Trans Mountain's financials, they concluded the pipeline corporation had a $67.1-million pre-tax loss and a $12.9 million loss after taxes.

The Canadian government plans to ultimately sell the pipeline. If it does so for a lower price than it paid for the infrastructure, it can legally forgive any debt that is left over, Sanzillo adds.

The Canadian Press was unable to reach out to the Department of Finance and Trans Mountain Corp. for reaction until the group's report was published Tuesday morning.

This report by The Canadian Press was first published Nov. 19, 2019.