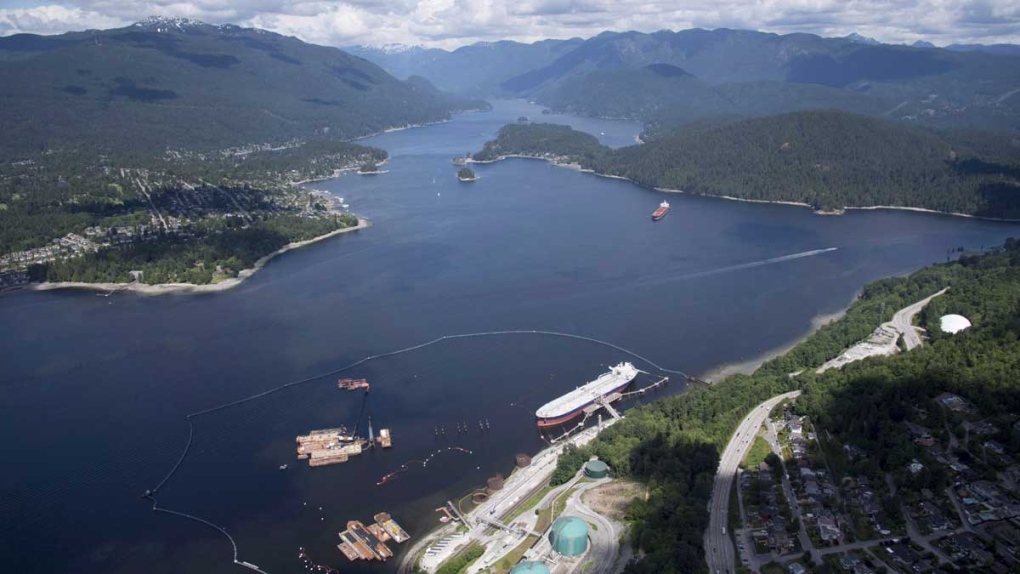 An aerial view of the Trans Mountain marine terminal, in Burnaby, B.C., is shown on May 29, 2018. (Jonathan Hayward / THE CANADIAN PRESS)

KAMLOOPS, B.C. - Two First Nations in British Columbia's Interior that had been part of a court challenge against the Trans Mountain pipeline expansion have reversed course and signed deals with the Crown corporation.

The Upper Nicola Band and Stk'emlupsemc te Secwepemc dropped out of the Federal Court of Appeal litigation, leaving four B.C. First Nations to fight the case.

The Upper Nicola says in a joint news release with Trans Mountain on Friday that its deal represents a “significant step forward” toward addressing environmental, archaeological and cultural heritage concerns.

It says the agreement provides resources to support its active involvement in emergency response and monitoring while also helping avoid and mitigate impacts on the band's interests and stewardship areas.

A news release from Stk'emlupsemc te Secwepemc says its leadership came together and determined an agreement could be a tool used as part of a larger strategy to protect its cultural, spiritual and historical connections to the land.

Trans Mountain spokeswoman Ali Hounsell says the two bands dropped out of the court challenge last week after continued discussions with the corporation.

“The conversations we had, understanding what their concerns were, seeing where we could address them, ultimately led to their decision to withdraw their participation in the Federal Court of Appeal,” she says in an interview.

Upper Nicola Chief Harvey McLeod says in the news release the band's negotiating team came up with the “best deal” possible under the circumstances.

“The bottom line is that the consultation process needs to change,” he says. “We still have a number of significant issues that must be addressed directly with Canada.”

The band continues to hold Canada to a consent-based approach consistent with the United Nations Declaration on the Rights of Indigenous Peoples, he adds.

The four remaining Indigenous groups involved in the court challenge against Trans Mountain are the Tsleil-Waututh and Squamish Nations in Metro Vancouver, the Coldwater Indian Band in Merritt and a coalition of small First Nations in the Fraser Valley.

The court has ruled that upcoming arguments can only focus on whether the latest round of Indigenous consultation was adequate.

Last week, the Tsleil-Waututh and three environmental groups sought leave to appeal that ruling in the Supreme Court of Canada, claiming the Federal Court was wrong to refuse to hear arguments about the risk of an oil spill or threats to endangered southern killer whales.