Rally in support of Afghanistan: More than 100 gather in Downtown Vancouver 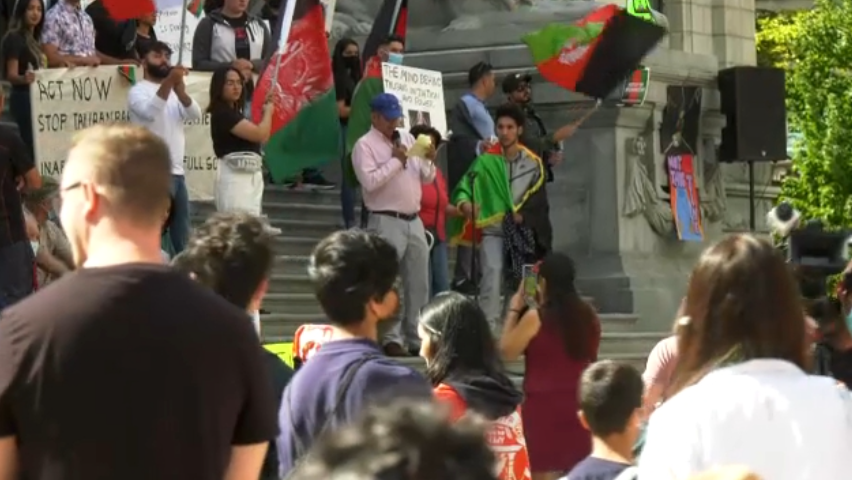 Vancouver’s Art Gallery square was filled Saturday afternoon, with Afghans and supporters who want to raise awareness of what’s going on in Afghanistan as the U.S. withdraws its military occupation and as the Taliban forcefully seizes control of the country.

“In a way we are the voice for the unheard and we want to be there for them,” said organizer Ahmadwaly Yasin.

More than 100 people turned out, listening to speakers and playing music as they stood together in solidarity and support of one another. Many are demanding that the Canadian government provide more assistance for families still there.

Yasin said he wants to see the Canadian government increase its offer of welcoming 20,000 refugees, to 50,000.

“We would like Canadian government to bring 50,000 refugees in a shorter period of time. Because five years from now we don’t know what’s going to happen in Afghanistan,” he told CTV News Vancouver.

“Right now the Taliban are being watched by the entire world, so they are behaving. The moment they’re not being watched anymore, everything will just go downhill.”

The rally came a day after the U.S. government launched an air strike targeting ISIS-K officials.

“Two high profile ISIS targets were killed and one was wounded,” said Major General Hank Taylor, with the U.S. army. “And we know of zero casualties.”

The air strike was in retaliation for a suicide bomb that killed more than 169 Afghans and 13 U.S. marines in the country’s capital, Kabul.

“Last two days, it is miserable,” said Tara Pedraz. “I am very stressed out, like, since this Taliban come back.”

One man at the rally, who didn’t want to give his name in order to protect his family still in Afghanistan, told CTV News Vancouver, his family can’t get out.

“The Taliban has shut the passport department, they are not giving any passport or any travel documents for people,” he said. “Yesterday my sister called me, (she said) ‘Hi brother can you send me some money just to buy some food for today and tomorrow?’ Banks are closed, western union is closed, no money, no food, no shelter.”

He said foreign help is still needed for people living in that country, and he is begging Western countries not to leave Afghanistan completely.