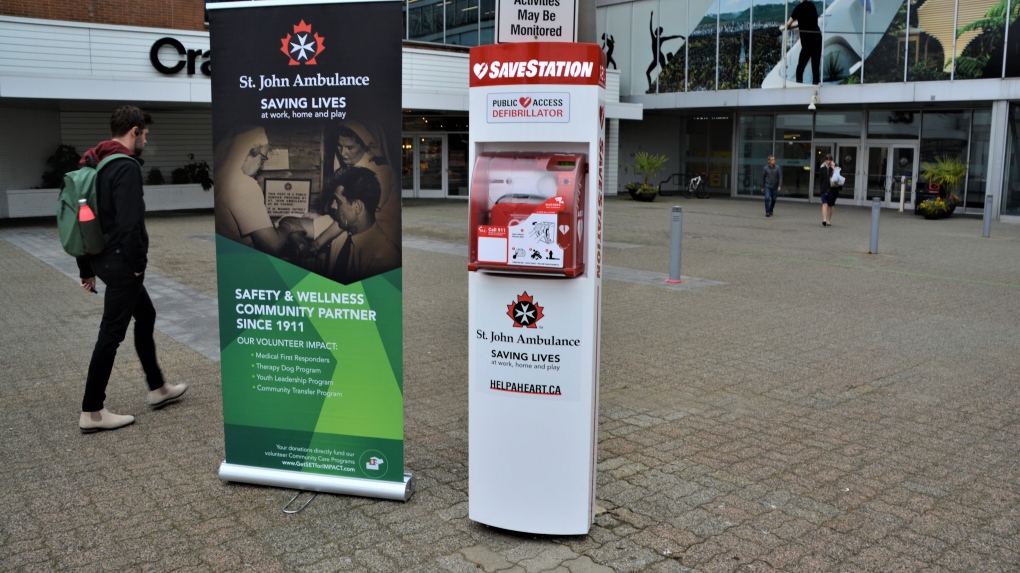 On Tuesday, St. John Ambulance announced it had placed an outdoor automated external defibrillator – or AED – outside Vancouver's Oakridge Centre near the Canada Line station. Another is being placed outside the St. John Ambulance building on 152nd Street in Surrey.

Both AEDs are unlocked and accessible 24-7.

"Up to 45,000 Canadians die each year from sudden cardiac arrests. Time is of the essence in these emergencies and people need quick access to an AED for a real chance of survival.

"We're piloting public AED stations at two busy locations with hope to raise awareness and interest to fund additional accessible units where they are most needed to save lives—be it public spaces, transit hubs, or public parks."

St. John Ambulance says that libraries, airports and community centres and some schools have AEDs, but they're rarely available 24-7 and outside. While the two new stations in Surrey and Vancouver will always be open, they are alarmed and remotely monitored.

"Oakridge Centre is one of the busiest shopping destinations in the Vancouver area, and is adjacent to a busy Canada Line stop,” said Susan Nicol, general manager of Oakridge Centre. "We're very pleased to have this AED installed outside of the centre. We want everyone who comes to enjoy all that Oakridge has to offer to feel safe at all times, day or night."

According to BC Emergency Health Services, response time from a 911 call is over nine minutes, but it only takes three to five minutes for brain damage to set in during a sudden cardiac arrest. However, CPR and using an AED increase survival by 90 per cent if its administered within the first minute of a cardiac arrest.

"Sudden cardiac arrests can happen to anyone, at any time or level of fitness or health," MacPherson said. "People need quick access to an AED, and everyone should be trained to give CPR."

Inside the new AED stations, St. John Ambulance is also including naloxone kits, which can be used to reverse the effects of opioid overdoses.