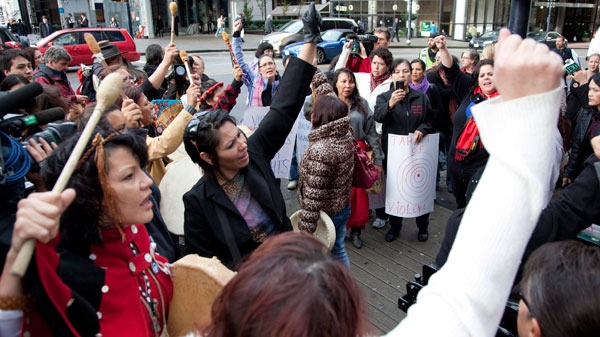 The same systemic problems that allowed notorious sex killer Paul Bernardo to rape and murder women in Ontario in the late 1980s and early 1990s contributed to the failure of the Vancouver police and RCMP to catch serial killer Robert Pickton, a public inquiry heard Monday.

Deputy Chief Jennifer Evans of Ontario's Peel Regional Police was asked to review the Pickton file for the inquiry, writing a critical report that concluded investigations by both the Vancouver police and the RCMP were plagued by poor communication and a lack of leadership.

Those issues were amplified, Evans testified Monday, by the fact that two jurisdictions were working on separate investigations.

Her testimony was peppered with references to the Paul Bernardo case and a report authored by an Ontario judge in 1996. Evans assisted Justice Archie Campbell during his review of the Bernardo case.

As with Bernardo, the fact that Pickton committed his crimes in different jurisdictions -- picking up sex workers in Vancouver and then killing them in nearby Port Coquitlam -- played a key role in the failure of police to catch him, said Evans.

"Systemically, there were similarities," Evans said when asked to compare the Bernardo and Pickton investigations.

"Bernardo was a multi-jurisdictional offender who travelled across multiple jurisdictions committing his crimes. That led to issues that Justice Campbell identified with regard to a breakdown in communication between the police forces."

Evans also said in both cases, there was no way to easily track tips that came into investigators in different jurisdictions. Supervisors weren't using major case-management techniques, and senior management failed to take ownership over their respective investigations.

In the Bernardo case, when rapes stopped in a city, the local police department gave the case a lower priority, even though Bernardo was still assaulting women in other communities.

With Pickton, RCMP investigators in Port Coquitlam were treating their investigation as historical because they believed women had stopped disappearing when, in fact, sex workers were still vanishing in Vancouver.

Bernardo was convicted of killing Leslie Mahaffy and Kristen French in St. Catharines and for manslaughter in the death of his then-sister-in-law, Tammy Homolka. He is serving an indefinite sentence. His former wife Karla Homolka received a 12-year sentence and has since been released.

In the Vancouver area, there were several separate but related investigations into missing sex workers and Pickton.

Vancouver police were investigating reports that sex workers were disappearing from the Downtown Eastside, while the RCMP was investigating whether Pickton was involved.

The RCMP had investigated Pickton for an attack on a sex worker in 1997, but Crown prosecutors declined to prosecute a charge of attempted murder.

Eventually, the Vancouver police and the RCMP formed a joint operation to investigate cases of missing women, known as Project Evenhanded.

Evans said for the most part, investigators on the ground in both agencies were talking with each other, but their superiors were not. In fact, some of those superiors appeared to be unaware of the most basic details of the missing women case.

For example, then Vancouver Police Chief Bruce Chambers appeared "shocked" in February 1999 when one of his officers told a community meeting in the Downtown Eastside that women who disappeared from the neighbourhood had likely met foul play.

Evans said the revelation should have prompted Chambers to take steps to ensure enough resources were devoted to the file and to contact senior management within the RCMP's Coquitlam detachment, but that didn't happen.

Even when officers were talking, they often failed to act with the urgency the case demanded, said Evans.

In particular, Evans pointed out that Project Evenhanded was a review of historic missing women cases and was premised on the theory -- incorrect, as it turned out -- that sex workers were no longer disappearing.

When an officer from Vancouver told the lead RCMP investigator with Evenhanded, Staff Sgt. Don Adam, in the fall of 2001 that women were still disappearing, Adam refused to shift focus.

He insisted redeploying his team to look into ongoing disappearances would have a "crippling effect" on his investigation, which was not considering the possibility that an active serial killer was still snatching women from Vancouver's Downtown Eastside.

Pickton was caught several months later, but not by anyone who was investigating Vancouver's missing women or Pickton's potential involvement.

Instead, a junior RCMP officer who had received a tip about illegal firearms obtained a search warrant for Pickton's farm. He brought along members of Project Evenhanded.

Officers found the belongings and remains of dozens of missing women, setting off a massive search that eventually uncovered the remains or DNA of 33 women.

Pickton was convicted of six counts of second-degree murder. He claimed to have killed 49.

Meanwhile, several officers who were involved in the Pickton investigation have obtained legal counsel to represent them in the hearings.

In addition, criminal lawyer Greg DelBigio told the inquiry he would be representing someone at the hearings, but he didn't reveal who that was.