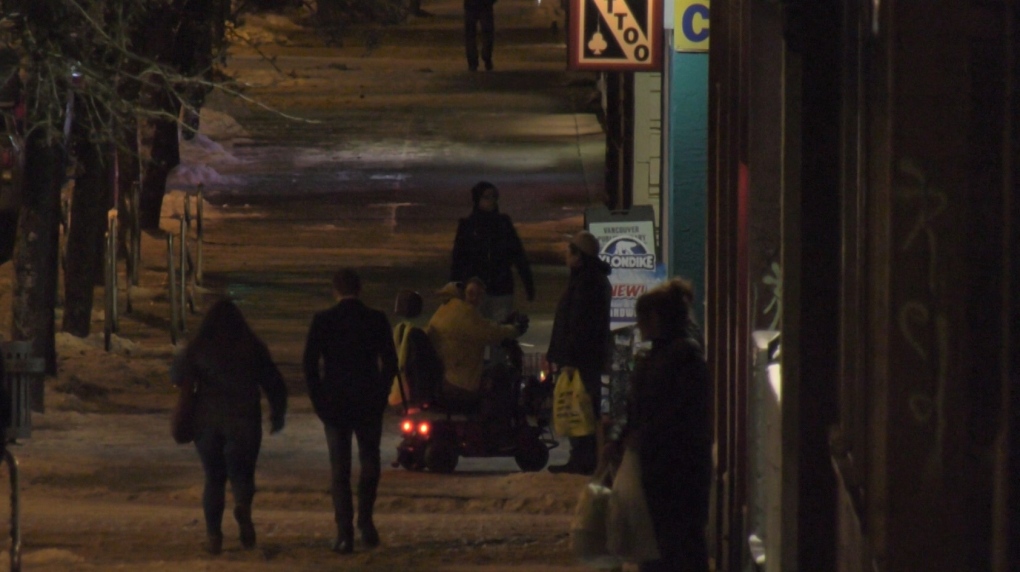 Snow and icy conditions on Vancouver's Downtown Eastside on Jan. 13, 2020.

VANCOUVER -- As temperatures dipped as low as -13 C with wind chill overnight Monday, local agencies that work with the Vancouver's homeless population are worried about those sleeping on the street.

"Residents sleeping outside are again urged to visit warming centres or extreme weather shelters which are open in several locations," the city said in a news release.

According to the city, about 600 people have been welcomed into the warming centres over the past two nights and they allow people to bring in pets and carts.

PLEASE SHARE: Warming centres in #Vancouver are open - all are welcome and people can bring their carts and pets. People with their own bedding may choose to sleep over, and hot drinks and snacks are available. EWR shelters are also open. See details in the tables below: pic.twitter.com/F4hycoQC27

But for those still staying on the street, conditions could be dangerous.

"The next few days are absolutely brutal for anybody who doesn't have a place. They're at risk for getting a really serious illness, they're at risk of dying," said Jeremy Hunka, communications manager with the Union Gospel Mission.

"This is as bad as it gets. This is the worst of the worst when you're talking about Vancouver and people's lives are on the line."

Hunka said local agencies are handing out emergency supplies like blankets, toques, gloves or heat-reflective tarps for those still sleeping outside, including at Oppenheimer Park.

But Hunka said situations could be even worse in the Fraser Valley where temperatures are even colder and there are fewer resources.

"What we're fearful about is those outside the Downtown Eastside, outside the core," he said. "It's bad for everybody, but for those who are out, away from shelter, don't know where to go, it's really desperate."

Right now, Vancouver's warming centres are scheduled to stay open until Thursday morning, but the city says it may extend the opening times if cold temperatures continue.

"People aren't ready for this. They don't expect weather like this," Hunka said. "We would just hate to see somebody lose their life in this cold snap. That's one of our greatest fears."