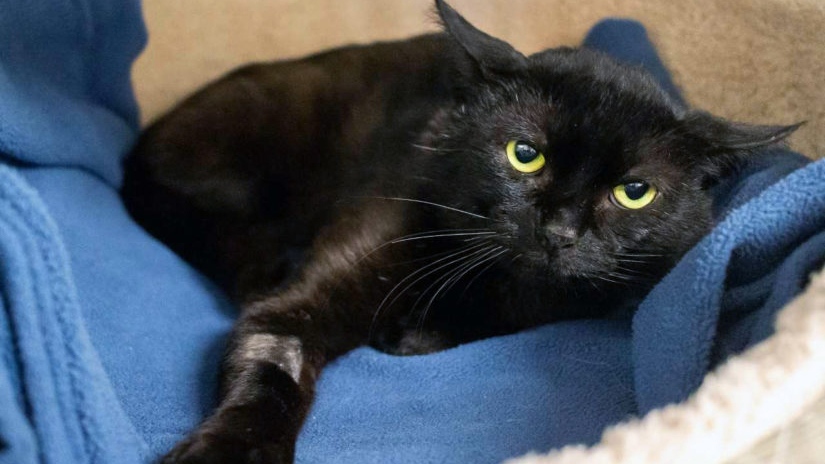 Mystic is seen in this image from the BC SPCA's website.

A day after the BC SPCA introduced British Columbians to a badly injured cat in need of extensive veterinary care, the amount of money donated for the feline is nearly 10 times higher than the organization's original goal.

According to the SPCA's Nanaimo branch, X-rays revealed that Mystic, a four-year-old cat, had BB pellets lodged in his abdomen, two near his spine and one near his ribs.

"He could not put weight on his left hind leg and the vet determined that Mystic had a comminuted fracture of the left proximal tibia and fibula," the SPCA said in a statement. "Basically, the bones in his upper left hind leg had been broken into several pieces. This sweet four-year-old black cat will need surgery to remove the pellets and repair his hind leg."

The BC SPCA said the medical bills associated with the cat's care had reached $1,674 by Monday evening, adding Mystic will need another month of recovery before he's ready to be adopted. By Tuesday afternoon, more than $16,400 had been donated.

"Mystic is a shy guy, who has been through a traumatic experience that has caused him a bit of anxiety," said Nanaimo and District branch manager Leon Davis. "With surgery and continued healing hopefully he will be relieved from his discomfort and be able to feel like a calm happy cat again."

The animal welfare agency says if Mystic’s medical costs and cost of care is less than is raised in his name, additional funds will provide care for other animals.

An animal cruelty investigation was launched into Mystic's case.