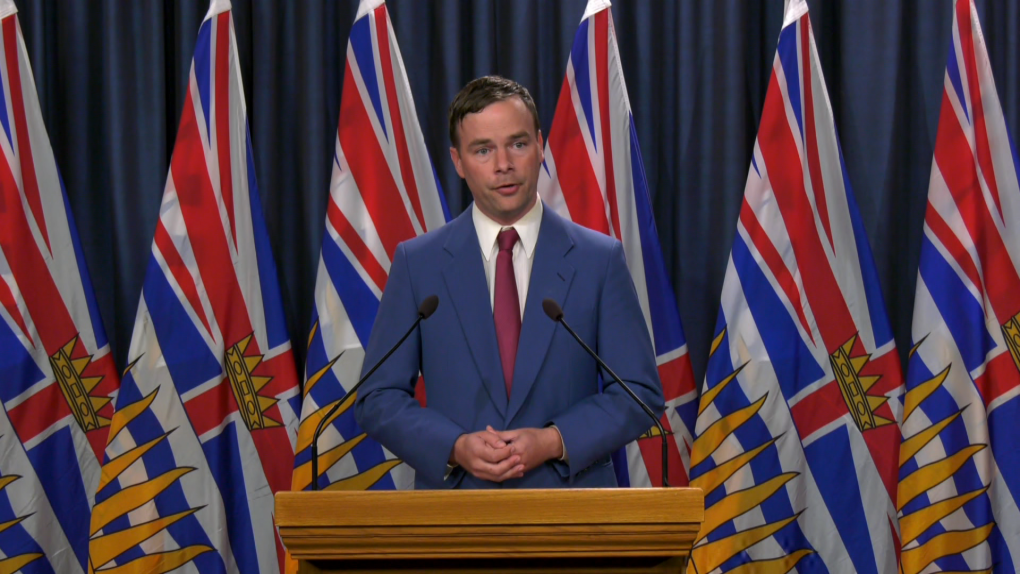 NDP MLA Spencer Chandra-Herbert speaks at a press conference in this file photo from March 2020.

VICTORIA -- Update: The BC Liberals said July 17 that none of their MLAs, including Laurie Throness, are advertising with The Light Magazine. The original story follows:

An NDP member of B.C.’s legislature is calling on Liberal leader Andrew Wilkinson to boot an MLA who refuses to stop advertising in a socially conservative magazine criticized for being homophobic.

After the advertising in The Light Magazine was revealed, several Liberal MLAs expressed their concern and stated publicly their support for the LGBTQ2+ community.

Wilkinson said advertising procedures would be reviewed, and later tweeted, “There is no room in the Liberal party for homophobia, transphobia or any other form of discrimination.”

The Light has published content against B.C.’s Sexual Orientation and Gender Identity (SOGI) policy in public schools. It has also published content opposing a ban on so-called “conversion therapy,” a discredited practice aimed at changing a person’s sexual orientation.

Chilliwack-Hope MLA Laurie Throness said he would continue to advertise in the publication because it aligns with his Christian values.

NDP MLA Spencer Chandra-Herbert, who said he was hurt and disappointed to find out that advertising dollars were spent on the publication, is now calling on the Liberals to eject Throness from caucus. The member from Vancouver said if the leader had no tolerance for discrimination, he should eject Throness.

Chandra-Herbert said he has not had direct contact with Wilkinson. Yet he characterizes Throness’ actions as “defying” the Liberal leader.

“The article the MLA was defending is an article arguing we shouldn’t have laws to ban conversion therapy because it would be hurtful,” Chandra-Herbert said. ‘So that to me sounds like he supports conversion therapy.”

CTV News requested an interview with Wilkinson. He appeared with Liberal caucus chair Jackie Tegart, who said, “Discrimination of any kind does not have any place in our caucus. This issue has been discussed and agreed to by all members and will be adhered to.”

When Wilkinson was asked if he was comfortable with Throness in caucus he said, “We have an agreement within our caucus that there is no room for discrimination of any sort including transphobia and homophobia.”

He took one question before leaving.

Andrew Weaver, a former Green Party MLA, introduced a private member’s bill to ban conversion therapy in British Columbia. Chandra-Herbert stood alongside him in support of the bill, yet the NDP government didn’t pursue it – saying it would be largely symbolic. Later, the province pursued a different avenue – asking the federal government make conversion therapy a criminal code offense. The federal Liberals introduced legislation in March of this year that, if passed, would ban the practice in Canada.