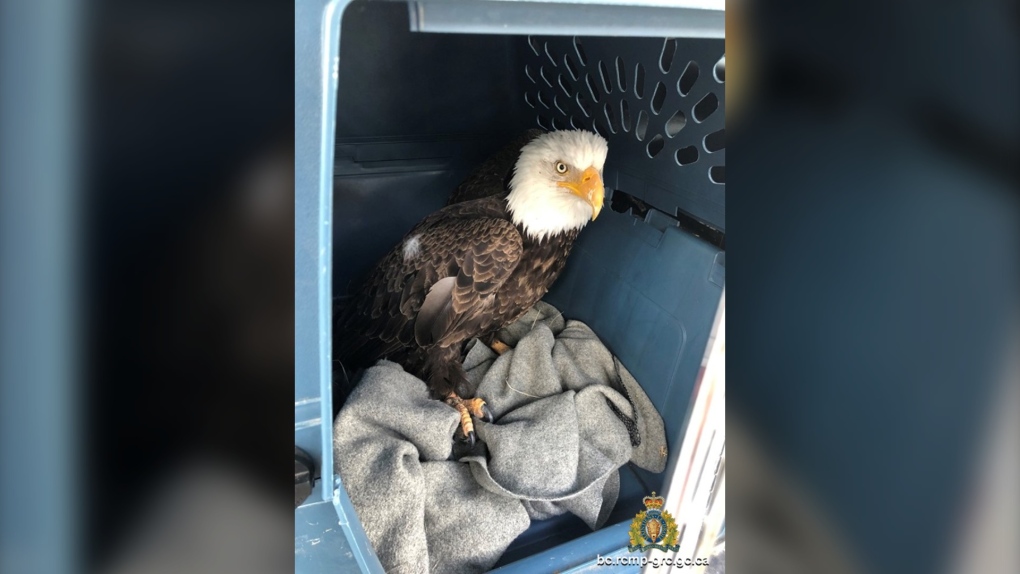 This bald eagle was found on the side of Mammett Lake Road near Logan Lake and rescued by RCMP officers. (BC RCMP)

While they may be internationally known for their iconic brown headgear, Canada's Mounties wear many hats.

As one officer in B.C.'s Nicola Valley region found out recently, that may also include roadside raptor rescuer.

According to a news release, on June 30 Logan Lake RCMP was alerted of an injured bald eagle on the side of Mamit Lake Road, one of the connectors between the town of Merritt and the community at Logan Lake.

Upon arrival, Const. Ryan Dell, the detachment's acting commander, found the bird was largely unable or unwilling to leave the area.

"He was quite calm when we picked him up too, I was surprised, I was expecting to get scratched or bit," Dell told CTV News Vancouver in a phone interview Thursday afternoon.

In an email to CTV News Vancouver, BC RCMP says they found no signs of eggs or a nest nearby.

It wasn't the first time Dell has had to rustle up a missing animal, but he says rescuing the eagle was a rare opportunity.

"I've dealt with donkeys and cows and chickens, all kinds of other animals, but nothing something as majestic as an eagle," the officer said.

Borrowing a dog carrier from a cell guard, Const. Dell and another officer returned to the eagle and transported the raptor back to the detachment, where it spent the night in Mountie care.

"Some days you are a career counsellor or a conflict mediator, other days a traffic enforcer or a homicide investigator, some days you are an animal wrangler," Const. Dell said in a statement.

B.C. RCMP says the bald eagle was then taken to the BC Wildlife Park Rehabilitation facility in Kamloops and currently remains there.

"Whatever the call, we take them all," says Dell.