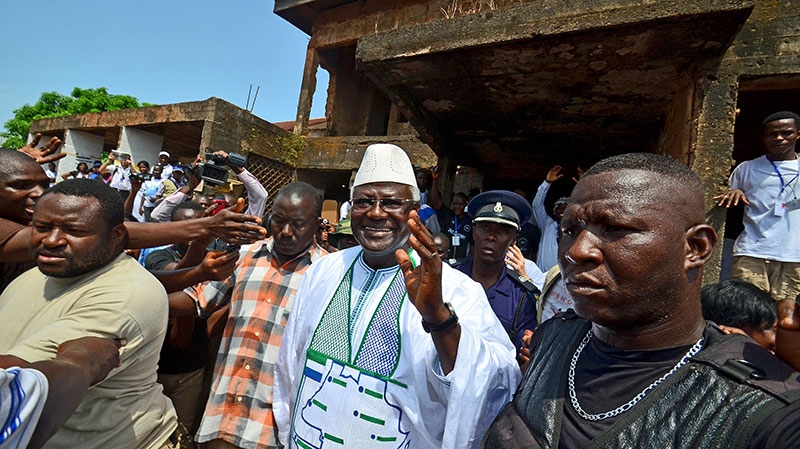 Incumbent President Ernest Bai Koroma waves to supporters as he leaves after voting, at a polling station in the Goderich neighborhood of Freetown, Sierra Leone, Saturday, Nov. 17, 2012. (AP / Tommy Trenchard)

In Sierra Leone, the future looks bright for the first time in a long time.  In the 1990’s the small West African nation became known around the world for a civil war that claimed tens of thousands of lives, a war funded in part by so-called blood diamonds and often fought by child soldiers high on a mixture of cocaine and gunpowder. Soldiers frequently cut off the hands and feet of villagers in a campaign of terror that shocked the international community.  The statistics are bleak.

The World Health Organization estimates 450-thousand of Sierra Leone’s six million people have a disability.  Fewer than half of the population can read and write.  The average life expectancy is below 50.  But something else is happening in Sierra Leone that gives cause for hope.  For the first time in its 54-year history, the government is now at least somewhat accountable to the citizenry it represents.

On November 17th, 2012, two million people voted in Sierra Leone’s third election since the end of the war.  There were complaints about spoiled ballots and accusations of fraud, but the United Nations praised the high turnout, the peaceful process and what it called “the people’s strong commitment to consolidating democracy.”  This commitment is where CTV News comes in, because key to any country’s democratic consolidation is a free press - journalists who can shine a light on problems and ask leaders tough questions about what’s being done to fix them.

As a free press emerges in Sierra Leone, CTV News is lending a hand.  With the help of the Canadian-based media development organization Journalists for Human Rights, CTV News is sending three journalists into Africa in 2014 to work with local news organizations as they begin to report on human rights issues, in some cases for the first time.  The stakes couldn’t be higher in a country with an abundance of natural resources and millions of citizens desperate for a decent standard of living.  For local media, the task is clear – give a voice to the people and expose corruption.  Reporters now have the tools.

In October, Sierra Leone’s parliament passed its first freedom of information law, meaning journalists have the right to demand information on how tax dollars are being spent.  I hope I’m able to help in some small way by sharing what I’ve learned after almost 20 years in journalism.  I also hope to learn much from the people I meet.