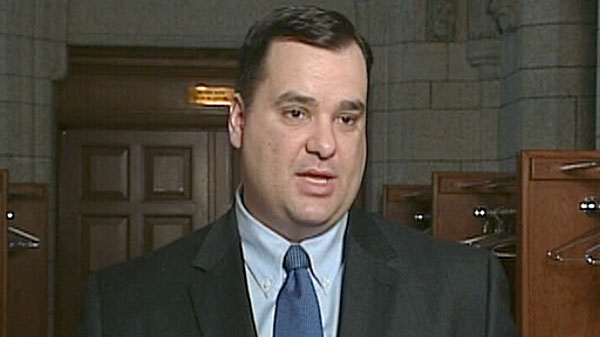 James Moore, the minister of Canadian heritage and official languages, speaks at a press conference in Ottawa, Wednesday, Feb. 16, 2011.

James Moore's young Liberal opponent is blasting the incumbent Conservative candidate for neither denouncing nor defending an editorial he authored on abortion more than a decade ago.

Moore refused to comment Friday on his article, titled "The Flip Side of Abortion Extremism," arguing it was being used by the Liberal Party to misrepresent his views.

The Port Moody-Westwood-Port Coquitlam candidate then threatened to send out a press release accusing his opponent, University of British Columbia student Stewart McGillivray, of cheating on his exams.

McGillivray responded Saturday in a statement calling Moore's comments "beyond the pale for a Minister of the Crown."

"Publicly threatening a youth who dares to engage in democracy and run for office is consistent with your party's governing morality, but enraging nonetheless," he said.

He also accused Moore of failing to repudiate the views on late-term abortion expressed in his editorial, which McGillivray called reprehensible.

"The last thing he should do, when confronted with his own quotations, is lash out at his opponents or the journalists asking the questions with the childish outburst quoted."

Moore's article was disseminated in a Liberal Party press release Friday, which described the piece as mocking the well-being of a pregnant woman as a legitimate reason for late-term abortion.

"A woman could legally argue that her ‘well being' could be self-defined as perhaps not wanting to gain weight, or not wanting to lose the use of a wardrobe," Moore's article reads.

The article contains a graphic description of an abortion performed on a six-months-pregnant woman, and casts a disapproving light on the "cold extremism of the partial-birth abortion advocates."

Moore, the Minister of Canadian Heritage, would not discuss the article with CTV News, but insisted he is pro-choice and called the Liberals' release "garbage."