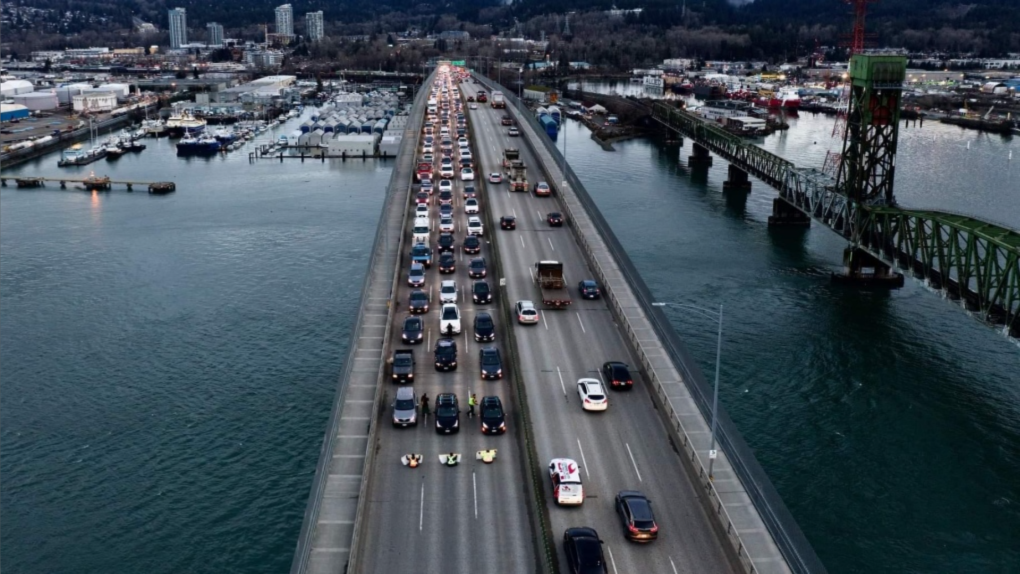 Protesters block traffic on the Second Narrows Bridge on Jan. 31, 2022. (Save Old Growth)

Weeks after warning that its tactics would escalate, a protest group behind many traffic-blocking stunts says instead that it's planning to slow down.

Demonstrators behind the blockades Metro Vancouver and on Vancouver Island said Wednesday it will be "de-escalating" its actions.

Save Old Growth, a group against the logging of B.C.'s old-growth forests, said in a news release that it is changing its tactics, moving away from the highway protests.

During one of those protests, a van was driven on to the Lions Gate Bridge and parked across multiple lanes. It appeared to witnesses that someone then threw the keys over the bridge.

The group said Wednesday that it will keep working, but instead, it will turn to public outreach and events.

"Other strategies will be used that won't stop traffic," the group said. "We continue to request the government take urgent steps to permanently protect B.C.'s remaining old growth forests."

Earlier this month, the group admitted it knew the blockades were unpopular. Some even got heated, with drivers getting out of their vehicles to voice their frustrations.

"They might not like our tactics, but they want to save old growth," protester Sam Nguyen said.

He said at the time that protesters – many of whom have been arrested, some of whom after supergluing their hands to the road – don't want to be out on the roads, blocking commuters, but that they felt the actions were needed.

The province's public safety minister praised police for the swiftness of arrests during these protests, and said he thought most people actually don't feel how Nguyen thinks they do.

"The public does not support what they're doing and if they think it does...they've got rocks in their head," Mike Farnworth said on June 14, after a blockade on Highway 1 near Horseshoe Bay.

At that time, the group was threatening escalation after taking a six-week hiatus.

A B.C. Mountie who was fired after showing a domestic violence victim what he described as a barely clothed "d*** pic" was rehired last year after arguing the RCMP's conduct board treated him unfairly.

COVID-19 hospitalizations due to Omicron are vastly underreported: grassroots organization

Analysis by a grassroots organization of scientists reveals hospitalizations from the Omicron variant of the virus that causes COVID-19 could be 70 per cent higher than what has been reported since December.

As home prices drop, here's what you can get in Canada's most affordable markets

CTVNews.ca has compiled a list of homes in some of the most affordable regions across Canada, as many real estate markets see drops in average prices.