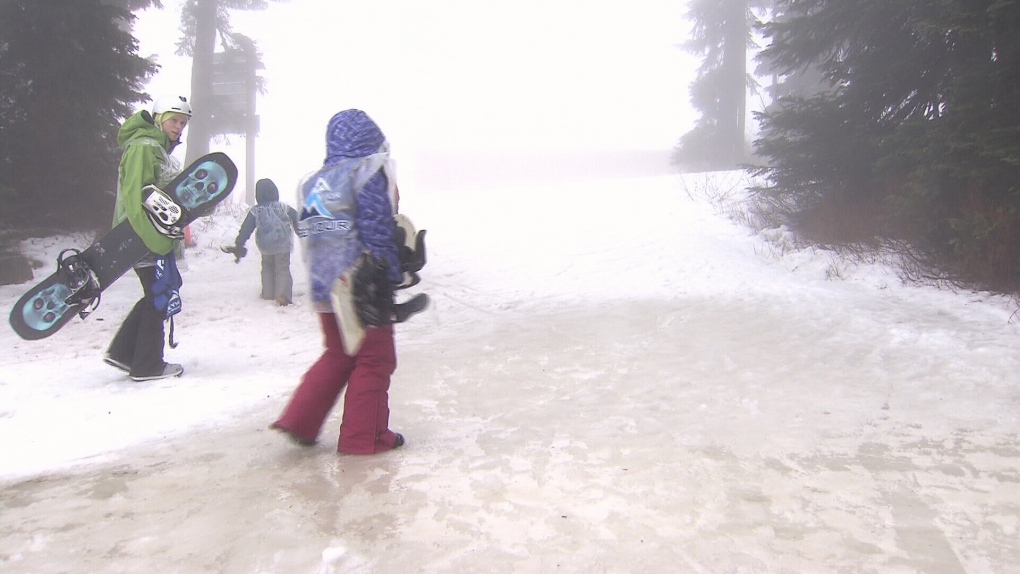 VANCOUVER -- Running a ski hill on British Columbia's coast can sometimes be a little like farming, says a spokesman for one Vancouver Island resort.

"Sometimes you feast, and this year we're seeing a bit of famine to start the season," said Brent Curtain of the Mount Washington Alpine Resort.

This time last year, his resort had 350 centimetres of snow at its mid-mountain baseline, but so far this year it only has 20 centimetres.

Mount Washington is not alone. With only days to go before the start of a new year, some ski resorts in B.C. are still praying for snow, and the lack of white stuff is beginning to affect employment opportunities and bottom lines.

Ski runs at Mount Washington are still closed, forcing hundreds of staff into a holding pattern for shifts, Curtain said.

And while the snow-tubing areas are open, it's only attracting a fraction for the 4,000 daily visitors that the resort would normally get, he said.

Snow generators are out of the question because the resort tends to have humid coastal air and temperatures average 0 C, he said.

Holiday fireworks and New Year's celebrations provide alternate activities at the mountain, Curtain said, but skiing and snowboarding remain the focus, and officials aren't yet considering other revenue sources.

Mt. Seymour on Vancouver's North Shore could also use a whiter winter, too, said a spokeswoman.

Three of the main lifts are closed because only 50 centimetres of snow have fallen at the mid-mountain baseline compared to the 270 centimetres at the same time last year, said Emmalee Brunt.

"This weather is unusual, but not unprecedented," she said. "We've had similar weather systems happen before."

Brunt said business over the Christmas holidays usually brings in 20 per cent of the mountain's revenue, and the lack of snow has dealt that number a blow.

The mountain doesn't have snowmaking capabilities to deal with the problem, since the resort has no access to a large lake or reservoir -- a crucial element for creating the material, she said.

But the resort is doing its best to keep its spirits up, she said.

The 1989 season had a late start, but took off when 518 centimetres of snow fell over 17 days, and people hope things will pick up in a similar way this year, she said.

"Fingers crossed that's going to go ahead and do that," she said.

Brunt said several events happening in the new year will hopefully bring in some sizable crowds.

The resort is hosting in February the TransWorld Snowboarding TransAm tour, which showcases riders competing to impress audiences with a variety of boarding tricks.

Meantime, officials from both mountains say it's too early to talk about how the lack of now will affect season-pass holders, and they are hoping a few storms will change business for the better.

Mount Washington extended passes by a season during one particularly dry period in 2004-2005, but Curtain can't say whether the same thing will happen this year.

Despite the conditions, not everyone is suffering.

The mountains opened Nov. 16, a day earlier than it opened last year.

Schmidt said 20 of the mountain's 37 lifts are open and conditions are ideal for artificial snow creation.

He said there's potential for the resort to attract riders who would normally be going to places like Mount Washington and Mt. Seymour.