VANCOUVER -- Between 400 and 500 people are stranded at a Lower Mainland ski hill after a landslide completely cut off the only road to the Sasquatch Mountain Resort - and it could take five to six days before cars can travel on the road again.

Friday's rainstorm brought winds of 80 km/h and 120 millimetres of rain to the area, said Shelby Lim, director of sales and marketing for the resort.

Then, on Friday evening, a landslide brought debris and trees down across Hemlock Valley Road, blocking vehicle access to the resort located northeast of Harrison Hot Springs. Parts of the road have been completely washed away. 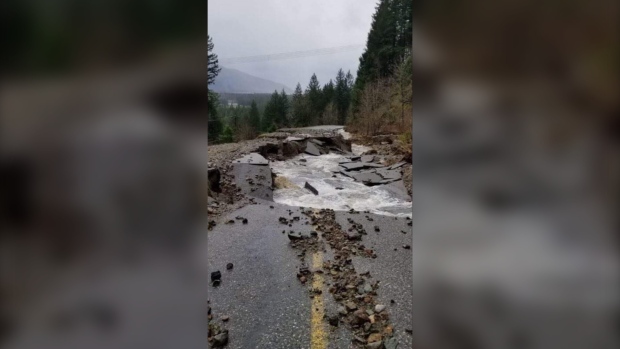 Hemlock Valley Road was damaged by a landslide on Friday, Jan. 31 after several days of heavy rain.(Submitted/Shelby Lim)

"Since then we've seen a couple of trees come down, we also have a major hole in the road."

That means hundreds of guests are stuck at the resort for the time being, Lim said. The resort has accommodation on site, so everyone has a place to stay, and its restaurants are serving food.

By Saturday afternoon, the resort had arranged for some people to leave by helicopter on a first come, first served basis. The helicopters can fit 12 people per trip and cost $150 per person, but Lim said there has not been a large number of people taking that option.

The resort may offer the helicopter option again on Sunday if the weather remains good enough to fly, Lim said.

The Ministry of Transportation and Infrastructure released a statement on Saturday afternoon, saying crews have completed an assessment of the washout and a plan is in place to restore one-lane of alternating traffic.

"However, due to the significant extent of the washout, it will require approximately five to six days to complete," according to the statement.

In the meantime, the ministry is advising guests of the Sasquatch Mountain Resort to stay there until crews can clear the debris.

Sasquatch Mountain has had to shut down all outdoor activities – including a race planned for Saturday and Sunday – because if someone were injured, first responders would not be able to get to them.

But Lim said guests are taking the situation in stride, while the resort is making an effort to provide indoor activities for children. 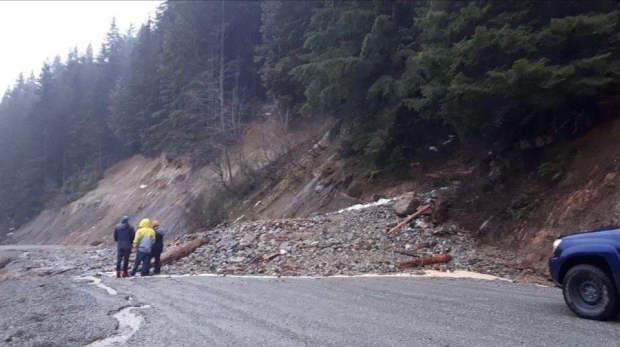 Access to Sasquatch Mountain Resort has been cut off because of debris and road damage.(Submitted/Shelby Lim)

BC Hydro is also working to restore power to the resort, which is currently relying on generators to provide some electricity. The resort is also still waiting to hear from BC Hydro on when power will be restored.

A state of emergency was declared for the Cowichan Valley on Vancouver Island on Friday, after heavy rains caused major flooding and some residents had to evacuate.

The heavy rain also caused a mudslide that buried train tracks in South Surrey and White Rock, halting freight and passenger traffic Friday night. The Coquihalla was also closed on Saturday between Hope and Merritt because of flooding.

Alyssa Charbonneau, a meteorologist with Environment Canada, said the heavy rainfall was the result of an atmospheric river: a ribbon of warm, wet air moving up from the tropics. It's a typical weather pattern for B.C.'s south coast in winter, but this one dumped a lot of rain in a short amount of time.

"Heavy rain over several days can cause a lot of impacts like we're seeing: lowland flooding, flooding of roads, you can get rockslides or ground giving way," Charbonneau said.

Charbonneau said some areas of B.C. got between 100 and 137 millimetres of rain over the storm's three-day course. This January had already been quite wet, meaning the ground was full of moisture already before the rainstorm, increasing the likelihood of slides.