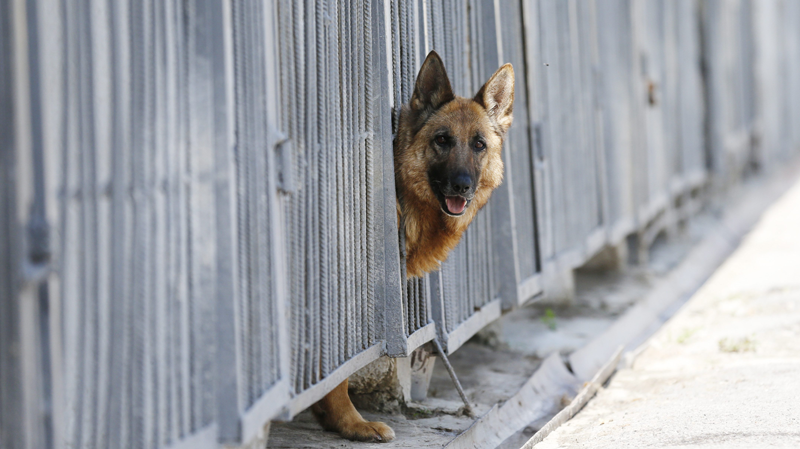 In this file image, a German shepherd is seen during a training exercise. (Photo ITAR-TASS/ Valery Matytsin)

In what’s being hailed as a landmark case for fighting animal abuse in B.C., a seized dog will not be returned to its owner over concerns it would endure future “emotional suffering.”

The German shepherd named Kello has been in the care of the BC SPCA since it was removed from the home of Vancouver senior Tarmo Viitre on March 9.

Brandon Isenor, a special constable from the animal welfare agency, visited the residence over complaints the large dog was being kept inside the 72-year-old’s vehicle for prolonged amounts of time.

But during the visit, Isenor said the senior continued to “act out physically” against the dog, including repeatedly striking Kello on the head hard enough “that the dog yelped and cowered,” according to a panel decision released online.

Isenor returned the next day with two Vancouver police officers to remove the dog, which remains at a local shelter.

Although Viitre was not charged with animal cruelty, the custody battle over the canine was just brought before a panel from the B.C. Farm Industry Review Board, the agency tasked with hearing appeals from decisions of the BC SPCA not to return animals to their owners.

Testifying about the behaviour he witnessed during his home visit, Isenor said that Viitre “smacked” his dog and “dragged him by his choke collar, grabbed him harshly by his snout in his efforts to restrain the dog.”

The constable testified that Viitre justified the behaviour by saying he had owned three German shepherds, and “that this was the way that he trained them.” Viitre told the panel he was preventing the dog from attacking the constable.

The panel also heard from a witness named Jessica MacDonald who testified she had seen Viitre yelling at his previous dog, Kali, and watched in horror as he whipped it with the leather end of the leash.

MacDonald reported to the SPCA in 2013 that the senior was in a “violent rage” when he dragged the dog up the stairs into his home, noting that the dog was yelping and whining and its legs were slipping.

In his defence, Viitre told the panel he had only struck his previous dog Kali once, and this must have been the incident witnessed by MacDonald. He refused ever abusing his current dog Kello – saying he considered the dog to be a member of the family – but his actions “had simply been a method of training the dog.”

But animal behaviourist Dr. Rebecca Ledger disagreed that his actions were a matter of training and handling, and said it demonstrated long-term emotional abuse.

Her examination of the animal at the shelter concluded that Viitre “handled Kello in ways that cause him physical and emotional suffering and pain since he was a puppy.”

During her assessment, she wrote that the dog was “extremely fearful” and exhibited “suspicious behaviour,” consistent with an animal who has been verbally and physically abused.

She argued that returning the dog to the senior would put the animal “into a situation in which he would suffer harm and distress,” adding that Kello needed extensive costly and time-consuming rehabilitation.

Even if Viitre agreed to refrain from using physical force and yelling at the dog, the behaviorist felt the dog would remain fearful for years, and she felt the dog may never recover from the psychological harm.

The panel agreed with Ledger’s recommendations and ruled that the BC SPCA’s seizure of the dog was justified – and Kello would not be returned to his owner.

Being able to use behaviour forensics to prove an animal is in emotional distress is a powerful new tool that the BC SPCA believes will prevent pets from being returned to “bad” owners.

“Even though there is no clear physical evidence, like where someone breaks an animal’s leg, this shows the emotional scars that are left on an animal,” said chief enforcement officer Marcie Moriarty.

“This is a groundbreaking case. Without that type of scientific evidence of emotional suffering provided by renowned experts like Dr. Ledger, these types of cases would be much more challenging to proceed criminally or civilly.”

Moriarty says this ruling sends a message that causing an animal pain in the name of training is no longer acceptable.

“There are still people and trainers out there that are perpetuating long-debunked theories that dominance is effective in training dogs,” she said.

“Using pain and aversion under the guise of training is not an excuse for abuse.”

The senior has notified the BC SPCA that he will fight the panel’s decision, and will appeal through the Supreme Court.