Is this your cow? Police unsure who owns animal seen running down Metro Vancouver highway 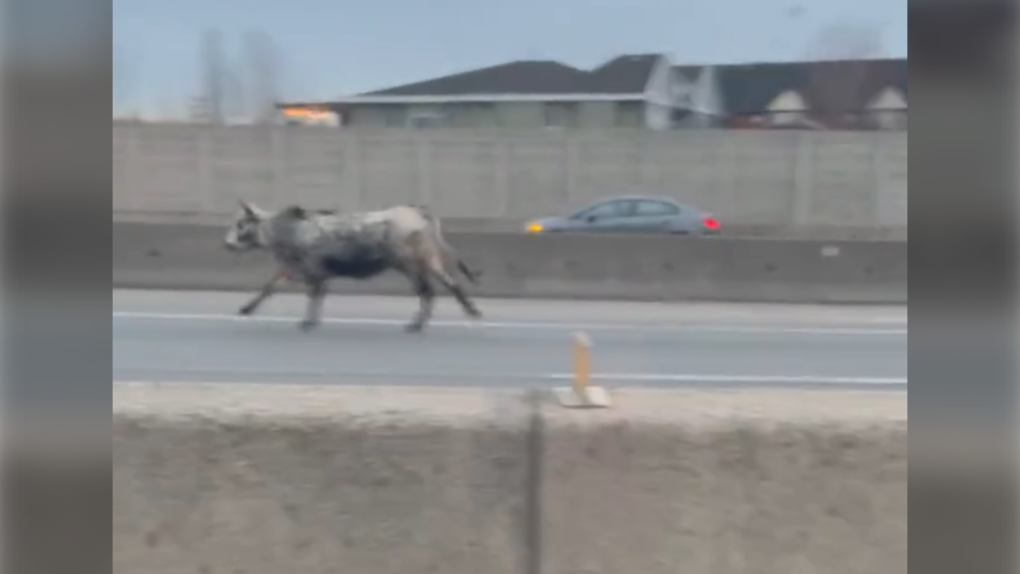 A bull or a steer was spotted running down Highway 91 in Queensborough on Saturday. (Twitter/@juliesheldon)

Greg Bay heard the galloping before he saw the animal.

He was stopped on Highway 91A in the New Westminster, B.C., neighbourhood of Queensborough around 4:45 p.m. Saturday, waiting for police to deal with some kind of incident. He hadn't seen an accident or any ambulances, and he had been stopped for several minutes, long enough that he turned his engine off.

Suddenly, a large animal was barrelling down the empty lanes beside him. He heard it coming with just enough time to get out his phone and snap a five-second video.

The grey blur goes by at what looks like its top speed.

A few hours later, after rewatching his video several times, Bay was still not entirely convinced what the animal was. It looked most like a cow, but it was moving faster than cows typically move. Bay thought it looked a bit like a moose or an elk without antlers.

Another video posted on Twitter later Saturday afternoon shows the animal more clearly. It appears to be either a bull or a steer.

Bay said most of the police vehicles he saw blocking the road were from the Delta Police Department, despite the sighting not being in the City of Delta.

Delta police spokesperson Cris Leykauf told CTV News on Sunday that an officer from the department assisted New Westminster police with a call about a bull on the road that was headed toward the Alex Fraser Bridge.

It was unclear what the resolution of the file was, since the call originated with the New Westminster Police Department, Leykauf said.

CTV News reached out to the NWPD for more information about where the animal came from and how the situation ended.

The watch commander on duty Sunday afternoon said the initial call came in from Queensborough residents who had spotted a cow wandering through their neighbourhood.

The animal made its way onto Highway 91A, causing traffic disruptions, before getting off the highway and eventually ending up in a farmer's field, police said.

That farmer, who is not the owner of the cow, helped police get the animal into a barn. As of Sunday afternoon, the owner of the wayward livestock had not been identified, according to the NWPD.

For Bay, the incident ended rather anticlimactically. A few minutes after he shot his video and the cow disappeared into the distance, traffic started moving again.

He estimated that he spent about 20 minutes stopped on the highway, but after the unusual sight, he wasn't too upset about the delay.