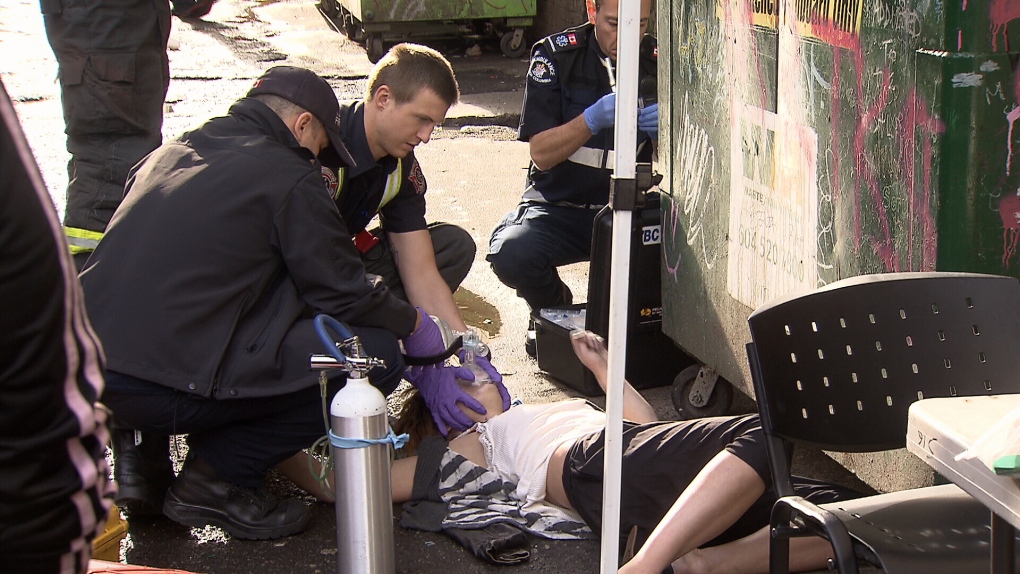 First responders tend to an overdose victim in Vancouver's Downtown Eastside. B.C. has revealed there were a record 494 overdose-related 911 calls in a single week this month. (CTV)

VANCOUVER -- A Vancouver drug policy expert says Canada is ready for decriminalization, countering comments made by federal Health Minister Patty Hajdu during a visit to the Downtown Eastside last week.

"Criminalization of people who are addicted and mentally ill and street-engaged, there is not an upside to that," said Donald MacPherson, the executive director of the Canadian Drug Policy Coalition and an adjunct professor at Simon Fraser University.

"It does nothing but harm people."

While touring an overdose prevention site in Vancouver's Downtown Eastside Thursday, Hajdu said Canada isn't ready to for decriminalization, a step some other countries have taken.

That's because there aren't yet enough services in place to help people fight their addictions, and service levels vary from province to province, Hajdu said.

To MacPherson, the arguments against decriminializing possession for personal use sound familiar: nearly 20 years ago, when advocates were fighting to set up Vancouver's first supervised injection site, the same objections were raised. He called Hajdu's comments "political deflection."

"That all needs to happen, but you can do it all – it's not either/or."

Vancouver has been in the grip of a deadly overdose crisis since 2016, when the black market drug supply began to be contaminated with the powerful synthetic opioid fentanyl. Since 2016, the opioid overdose crisis has killed nearly 14,000 Canadians, according to Statistics Canada.

With the blessing of the B.C. government and provincial health authority, advocates and organizations began open overdose prevention sites throughout the Downtown Eastside in 2016.

The model, where people come to use drugs and front-line workers can treat overdoses with the overdose reversal drug naloxone, has now been adopted in other cities across Canada.

In response to the crisis, Vancouver service agencies have also been expanding a model called safe supply, where drug users are prescribed prescription opioids so they aren’t using deadly contaminated street drugs.

This week, Dr. Mark Tyndall, an addictions expert and UBC professor, unveiled a vending machine that dispenses prescription drugs to regular opioid users with a history of overdose and fentanyl detected in their systems.

MacPherson said there's no question there needs to be more of everything: more treatment services, more safe supply, more social supports and access to housing. And it's provincial governments that need to step up on many of those files, because healthcare is a provincial responsibility, MacPherson added.

Where would decriminalization fit into the picture?

"You could decriminalize possession for personal use tomorrow, and you wouldn’t see much difference, except that you would remove the number one stigmatizing thing about people who use drugs: they're criminals," MacPherson said.

While B.C.'s overdose death rate has been falling, MacPherson warned the number of overdoses remain high.

"That tells me that the drug market is a still major toxic situation," MacPherson said.

With files from The Canadian Press and CTV News Vancouver's Alissa Thibault.