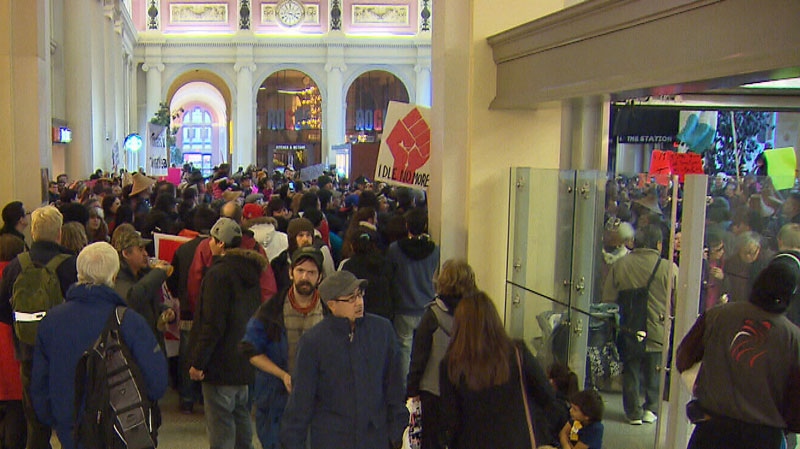 Hundreds of protesters descended on the lobby of Waterfront Station, a busy commuter hotspot where the SkyTrain, Canada Line and SeaBus meet downtown, to chant and drum briefly before wrapping up at around 4 p.m.

Participant Curtis Ahenakew of Saskatchewan said he’s fighting back against the Conservative government’s omnibus Bill C-45, which many argue will strip away Constitutionally-protected treaty and aboriginal rights.

“They cannot do that without consulting First Nations,” Ahenakew said. “We are proud, strong First Nations people standing up in solidarity and strength, trying not to offend anybody. We’re here in peaceful protests to sing proud and loud across Canada.”

Spence has vowed to survive on nothing more than fish broth and herbal tea until Prime Minister Stephen Harper agrees to meet with her and discuss her concerns.

The Idle No More movement has since taken the form of rallies, flash mobs, dances and even road and rail blockades in some areas of Canada.

The protest also spilled over into the United States with protests in Arizona, Colorado, Washington, D.C. and Texas, among others, according to an Idle No More Facebook page.

Another B.C. protest is planned for Saturday at the Peace Arch border.