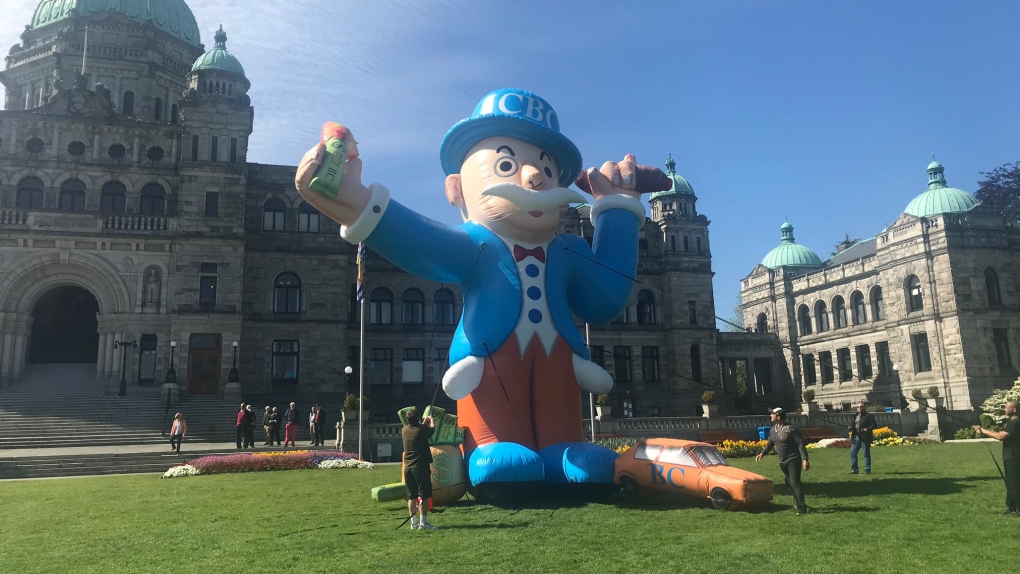 A balloon nicknamed 'Baron Von Fender Bender' is seen outside the B.C. legislature in Victoria on Wednesday, May 8, 2019. (Bhinder Sajan / CTV News Vancouver)

He's big, he's bold and he's ready to make his mark. Meet “Baron Von Fender Bender,” a 10-metre balloon that appeared on the lawn of the B.C. legislature early Wednesday.

The humongous balloon is courtesy of the Canadian Taxpayer Federation. It serves to protest that ICBC is the only auto insurer in B.C and the CTF wants the government to allow privatized insurers to operate in the province.

Kris Sims, B.C. director of the CTF said in a release, “Our ICBC monopolist balloon is a symbol of this high-cost, no-choice, bloated, nearly insolvent insurance corporation and we’re making sure politicians get the message: if it takes a balloon man bigger and scarier than King Kong, so be it.”

The balloon is clearly a custom and pointed piece mocking ICBC. The balloon has an ICBC hat and jacket in the company’s blue hue. It is also holding a cigar in one hand, lit with a burning stack of cash held in the other.

The pockets are also turned out, a dig at the insurers’ financial problems in recent years. In 2017, the insurance company reported a loss of nearly $1 billion.

According to the statement by Sims, there should be more options for drivers to find insurance elsewhere.

“B.C. drivers are already paying the highest gas prices in North America and this high-cost ICBC monopoly just increases the pain – it’s time to give drivers a choice and let them save money,” Sims said in a statement.

The CTF will be bringing “Baron Von Fender Bender” to other B.C. cities this summer to urge politicians to reverse the monopoly of ICBC on motorists.