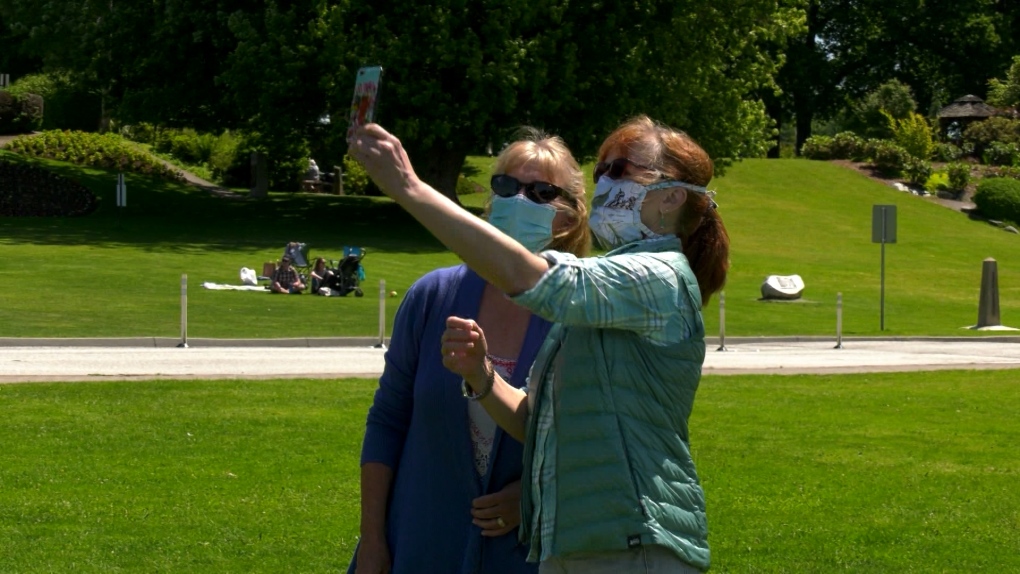 Bellingham resident Jeanette Paige met her sister from North Vancouver at the park on Thursday prior to its closure.

VANCOUVER -- More than a thousand people have signed a petition asking B.C. to reopen Peace Arch Park after it was abruptly closed last week due to crowding concerns.

The park, which was built on the international boundary between Canada and the U.S., is heavily patrolled to make sure nobody crosses, but officials normally allow visitors to explore the entire park on both sides of the border.

So, when the border closed to most travellers to slow the spread of COVID-19, the park was used as a place for those trapped on either side to meet.

But the province closed the park last week after local roads and parking lots became overwhelmed with traffic. B.C.'s top doctor said the decision to close the park wasn't made because of a risk of COVID-19, however.

The online petition, which had just over 1,200 signatures as of Tuesday morning, calls on the province to reopen the park.

"If new protocols need to be enforced such as a reservation system so be it, but let families continue to reunite with one another," the petition says.

"The Canadian government is better than this. We can innovate rather than close the only means of connecting with family and friends."

While the border closure has been extended to at least July 21, new rules came into effect earlier this month allowing immediate family members of Canadian citizens and permanent residents to enter Canada to be with their family member for a period of at least 15 days.

The visitor also must be asymptomatic of COVID-19 and self-isolate for 14 days when they arrive.

Those new rules exclude some loved ones, the petition points out, like engaged couples or partners who aren't married.

The park, which was closed Thursday evening, doesn't have a reopening date set but a statement from the province said "the park will reopened when it is deemed safe to do so."