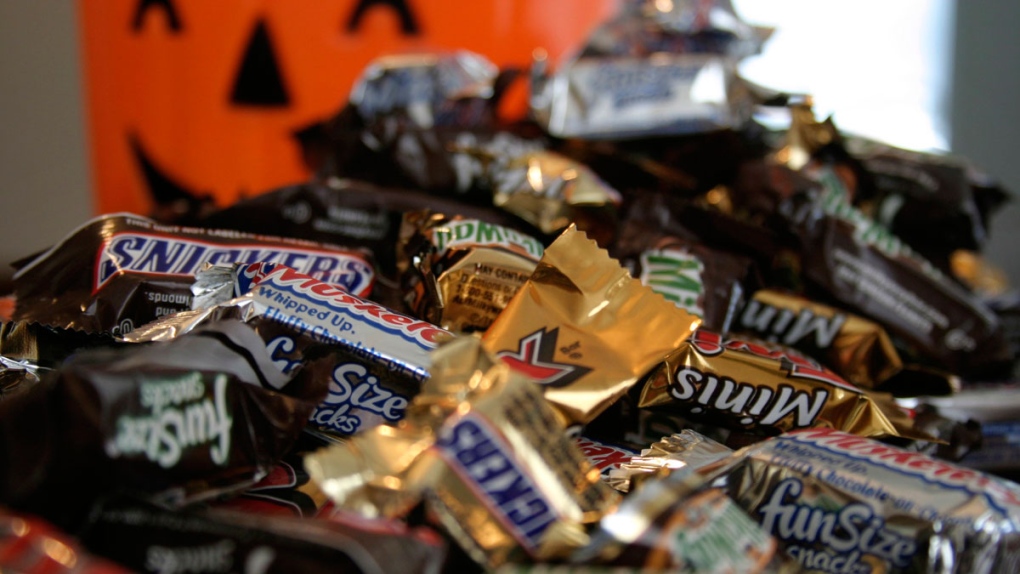 TORONTO - For a lot candy-crazed kids, Halloween is synonymous with sugar, and that makes it one of the scariest times of the year for parents fearful of encouraging bad eating habits.

Knowing how to curb monstrous appetites without being the party pooper can be tricky, and advice can vary over when and how to pick your battle over high-calorie sweets.

Is there such a thing as "good candy"? Does a spike in sugar intake really make kids hyper? Does limiting the candy they eat give kids a complex about food?

The right approach to keeping kids from overdoing it requires advance planning and basic ground rules, many experts say, with several warning that coming down too hard could end up making sweets more desirable.

Here's a look at what some dietary, dental and health experts say on navigating junk food pitfalls.

THE "NO LIMITS" ARGUMENT

Your kid may want to overdo it on Halloween night but Ontario dietitians Chelsea Cross and Andrea D'Ambrosio are each emphatic that parents should not limit candy consumption.

Cross, who specializes in weight loss and digestive health in Guelph, Ont., says to instead focus on promoting healthy eating habits so children learn to moderate intake year-round. What you don't want, she says, is for kids to believe some foods are "bad" or "good."

D'Ambrosio warns that "negativity" and "fear mongering" increases desire for the very food you're trying to restrict, and that's why she has a "liberal candy stance" outlined in a blog post titled: "Why parents must stop restricting Halloween candy."

"When parents encourage children to listen to their bodies, the child discovers how much they need to eat," says Kitchener, Ont.-based D'Ambrosio of Dietetic Directions. "Conversely, when parents dictate how much the child 'should' eat, we slowly erode the intuitive eating skill."

Of course, not all experts agree with such loose rules. Vancouver dietitian Ali Chernoff says kids should be limited to one candy on Halloween and ensuing days to instill moderation.

Avoid gorging Halloween night by filling tummies with a balanced meal or healthy snacks beforehand, adds Cross, and redirect kids who are fixated on candies to other festive activities like spooky stories or songs.

Chernoff notes pretty much all candy is packed with sugar and there's little nutritional difference between the commercially popular brands.

"I would love to give out apples," Chernoff chuckles.

When it comes to candy options, natural licorice is lower in calories and has no fat, she says. Meanwhile, a growing number of brands like stevia-sweetened SmartSweets gummies are low in sugar and high in fibre, she says.

Chernoff recalls how her mother - a dental hygienist - used to give out toothbrushes on Halloween night to avoid cavities. Sticky gummies and chews, and sweets that sit on teeth like lollipops and juice, are among the worst for teeth, she says.

But don't be fooled by those supermarket gummies that tout ingredients including real fruits and vegetables. Cross calls those products "a gimmick."

"It could be from real fruit but it's still just a fast sugar hit, you're not getting any fibre or any benefits, per se," says Cross, whose MC Dietetics has offices in Mississauga and Guelph, Ont.

Despite long-held notions to the contrary, Chernoff says there's no actual proof behind the belief that sugar turns little kids into over-active monsters.

The founder of Nutrition At Its Best dismisses it entirely as "a myth."

"There is no scientific evidence showing that sugar makes you hyper," she says.

"Your energy is really coming from fruits and vegetables and grains. That's the gas to your car, that's what fuels us and gives us actual energy."

Kids are generally nuts for all the associated activities of Halloween, adds Cross, who suspects many are just as hyped up on dressing up and night-time exploration as the candy itself.

In the days that follow, the Canadian Dental Association recommends only eating treats with a meal, and modelling good behaviour with your children by eating one yourself and talking about what you like about the candy you chose.

They also advise drinking a glass of water after eating a sugary treat to help wash away some of the sugars and acids.

Post-Halloween parents should be in charge of the snack haul, not the kids, adds Cross. She suggests putting the stash in a hard-to-reach location and just not offering it as the days pass.

Allow one treat a day for the first week or so after Halloween, and then work on tapering kids off of their stash, she says.

And don't deny them if they ask for a candy, she adds. Eventually, she says most kids will return to their regular routine.