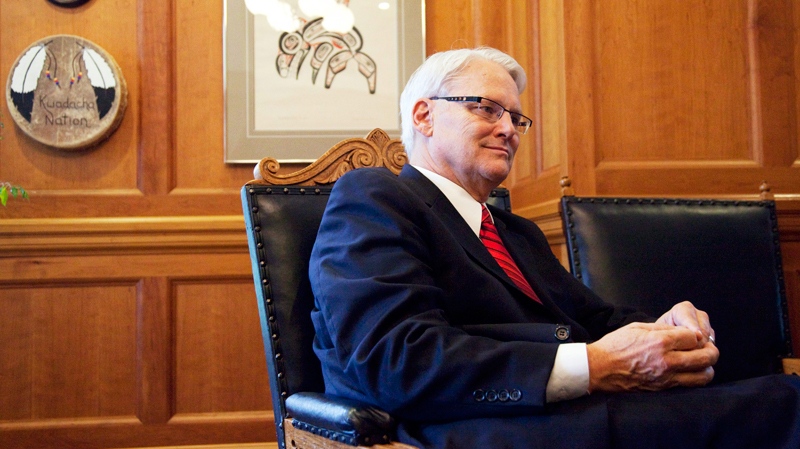 B.C. Premier Gordon Campbell pauses for a moment as he takes part in a interview in his office in Victoria, B.C. Monday, Feb 14, 2011. (Jonathan Hayward / THE CANADIAN PRESS)

Campbell's elevation to one of Canada's highest diplomatic posts comes after he resigned last fall as B.C. premier, as his popularity plummeted following his government's disastrous unveiling of the 12-per cent harmonized sales tax.

Campbell stepped down after 26 years in politics, nine of them as premier.

Sources say the announcement of Campbell's appointment is days away.

Campbell's role in helping host the 2010 Winter Olympics in Vancouver will make his transition to diplomatic life in Britain almost seamless, since London is hosting the Summer Olympics in 2012, he said.

"He has been a one-man diplomat while he was premier of the province, for sure, showing leadership on a number of files that received international attention," Falcon said following a speech in Victoria.

"Obviously as a host of a very successful, maybe one of the most successful Winter and Paralympic Games, maybe that probably lends some positive aspects for London which is hosting the 2012 Summer Olympics Games."

Although he is a provincial Liberal, Campbell's years as B.C. premier ushered in a new era of co-operation between Victoria and Ottawa, regardless of the political stripe of the national government.

Before Campbell, relations between the federal and B.C. governments were most often rocky, but Campbell preached co-operation with both the Harper Conservatives and the former Liberal governments on almost every issue.

Campbell only once publicly disagreed with the Harper Tories and that was over the dropping of the Kelowna Accord, an aboriginal rights plan championed by former Liberal prime minister Paul Martin.

But Campbell's introduction of B.C.'s carbon tax in put him on the international stage as a North American leader in the fight against climate change.

His premature departure from the B.C. political scene ended weeks of speculation about a pending caucus revolt, as the former Vancouver mayor's public approval rating dropped into the single digits.

Critics of the HST, led by former Social Credit premier Bill Vander Zalm, launched a relentless campaign against the tax that eventually forced an upcoming referendum on the combined federal-provincial levy.

Campbell would replace veteran career diplomat James Wright, who was appointed to the high commissioner's post in August 2006, after previous diplomatic postings in Washington and Moscow.

One of Wright's major responsibilities in London was dealing with Britain and other European allies during Canada's combat mission in Afghanistan. He had previously served in London as political officer for four years in the early 1990s.