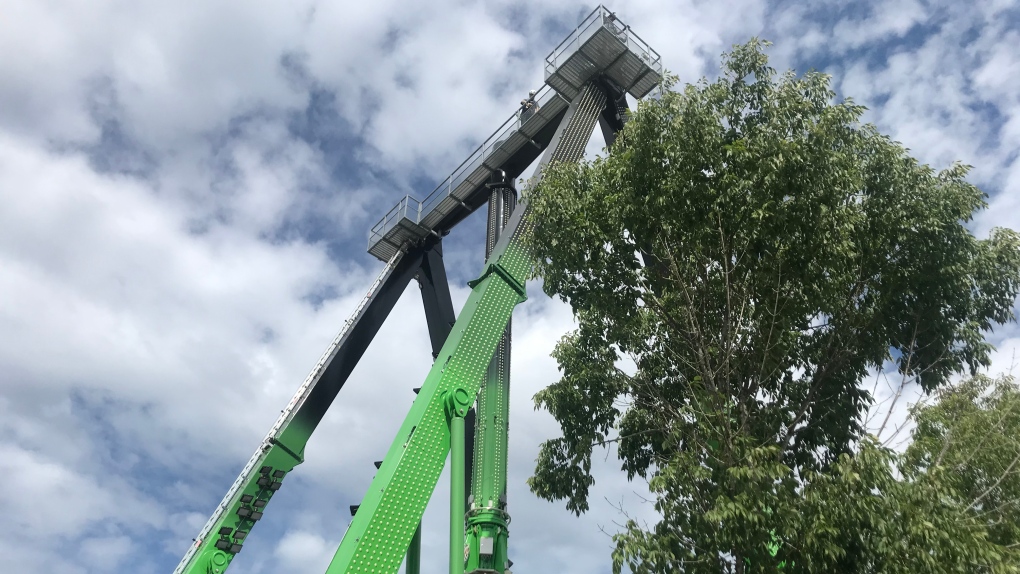 'The Beast,' a Vancouver amusement park ride, is shown in a photo from CTV News Vancouver's David Molko on Tuesday, Aug. 13, 2019.

A Vancouver amusement park ride shut down earlier this week due to part failure won't be repaired in time for the start of the Pacific National Exhibition.

The pendulum-style Playland ride known as the Beast was stopped Monday after witnesses reported seeing oil spilling as it swung.

In an email to CTV News Friday, Playland spokesperson Laura Ballance said a part in the gear box had broken. The amusement park had to order a new one, so it will likely be a week before the Beast is running again.

No one was injured when the ride appeared to start leaking oil onto those inside and below, but witnesses said their clothing was soaked by the spill.

Ballance previously apologized to guests and acknowledged the experience was "scary." She said all guests were taken care of at the time, and they were provided with information on how to get the non-toxic oil off skin and clothes.

She said B.C.'s ride protocols are "exceptionally high," and that all rides are inspected by Technical Safety BC at least once a year. They're also inspected daily before operations begin.

In July 2017, the Beast was temporarily shut down and expected following an incident in the U.S.

The Fireball, a similar style ride, suffered a structural failure at the Ohio State Fair. A teenager died and seven others were injured. Playland inspected the Beast only as a precaution.

Monday's incident came at an unfortunate time. Saturday marks the start of the annual PNE fair, which draws thousands to the grounds each year.

While thrill seekers won't be waiting in line for the Beast, most of Playland's other rides will be open this weekend.

Ticket prices for the summer night concerts range from $25 to $535.85, plus fees, and are available online. https://www.ticketleader.ca/events/detail/pne-fair-summer-night-concerts

Like most, this fair includes a variety of unique eats, including pickle cotton candy, butterbeer soft serve and ramen corn dogs.

Also at the PNE is a chance to win the annual prize home. This year's is a 3,159-square-foot farmhouse. The home can be toured at the fair, but will be relocated to Kelowna's Kirschner Mountain when the PNE is over.