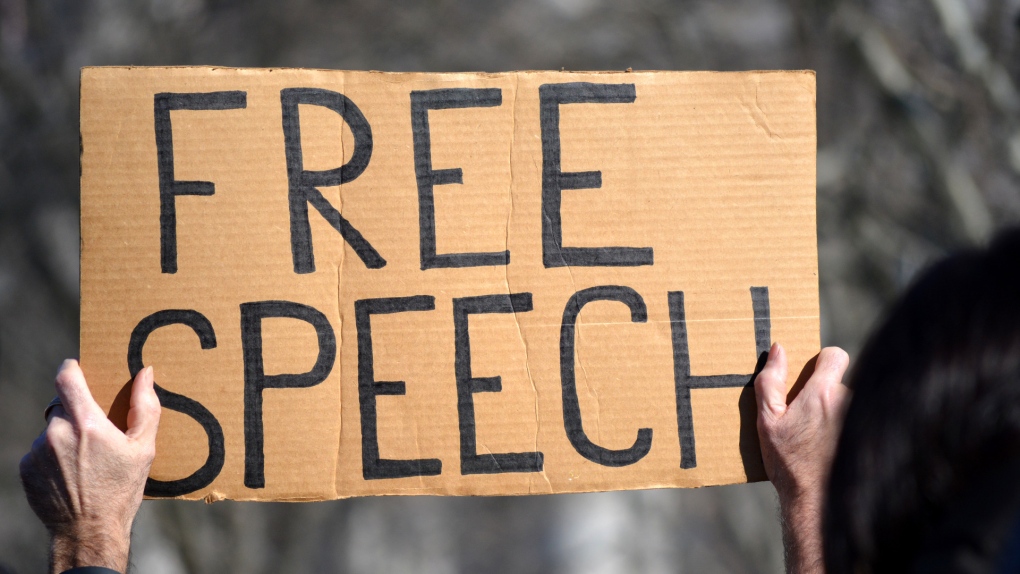 VANCOUVER -- A protest against trans health-care scheduled this weekend in downtown Vancouver has reignited a debate pitting the protection of vulnerable youth against the right to free speech.

Vancouver social justice lawyer Adrienne Smith fears the April 10 event will include transphobic rhetoric that contributes to real-world harm, and believes police and city officials have the legal tools necessary to shut the protest down.

"It's definitely a breach of public order to say hateful things that are likely to inflame others," Smith said. "There's no middle ground with hateful comments."

But the City of Vancouver has said its hands are tied, despite labelling the event "anti-trans" along with the Vancouver Pride Society. Officials argue that intervening in the protest would be a violation of free speech rights, and a lawyer for the Canadian Civil Liberties Association agrees.

"They don't have any legal basis to shut it down and they shouldn't shut it down," said Cara Zwibel, director of the fundamental freedoms program at the CCLA.

The protest, set to take place outside the Vancouver Art Gallery, includes speakers connected to the far-right populist People’s Party of Canada, and elected officials known for their anti-trans views, among others.

Promotional material says the event is to "stop child-medical transition." In other words, to protest transgender kids accessing gender-affirming health care, which can include puberty blockers and connecting them with trans-inclusive health care providers.

Organizer Paul Dirks, a Baptist pastor, told CTV News he disputes any suggestion that the event is "anti-trans," noting that there is a trans speaker billed to appear – albeit one who self-identifies as being opposed to "transgender ideology."

Dirks said he believe it's transgender-specific treatments that are causing harm to young people, not his movement.

A wide body of medical research shows that gender-affirming medical care, including access to puberty blockers, has both physical and mental health benefits for trans and gender non-conforming youth.

Gender identity expression is also protected under both the B.C. and Canadian human rights codes, and a recent court ruling chastised a parent for improperly trying to interfere with a teen’s gender transition, which had been approved by a team of medical professionals.

Saturday's protest could therefore be "damaging to the public order, and certainly to parties who are directly affected by it, like trans people," Smith Said. "In particular, trans youth."

"Holding a rally that's going to express views that are overtly discriminatory, in my view, can be controlled with … legal tools" Smith added.

These tools could come in the form of low-level criminal charges against those participating for breaching the peace and public disorder, according to the lawyer. It could also include fines for breaking COVID-19 public health orders if people are gathering en-masse and unmasked, as well as fines if any city bylaws are broken.

The Vancouver Pride Society echoed Smith's concerns, and is also advocating for police intervention "to issue fines or disperse the event in the case of more than 10 people in attendance, as it has done so for other event organizers."

"Furthermore, we have asked the City of Vancouver council and staff to examine how to keep groups that express these harmful ideologies from having a public, civic space to do so," the society said in a statement this week.

City officials are firm that they won’t be able to shut down the protest, despite their strong condemnation of the event.

“We stand against transphobia and all forms of inequity that affect our communities,” reads a March 31 statement from the city.

“In accordance with the Charter of Rights and Freedoms, the city cannot prevent people from assembling on public property for exercising their right of freedom of expression."

The city also stresses that it didn’t issue any permits for the event.

Zwibel said it would be an over-reach to try and prevent or shut down the protest. Although both she and her organization strongly oppose the event – and supports trans rights – she feels the city’s choice makes sense.

“I certainly understand why this kind of protest would make people upset and uncomfortable,” Zwibel said. “I have a lot of empathy for people who have to go out and see that people are shouting about removing rights and opportunities from them, I can't imagine how hurtful that is.”

But she still supports the city's approach.

“We have a constitutional protection for free expression and freedom of peaceful assembly in Canada, and the fact that we … vehemently disagree with the (protest’s anti-trans) message … doesn't mean that those rights change, provided there isn't illegal activity happening at this protest," she said.

Both Smith and Zwibel agree that the City of Vancouver’s move to release a statement of support for the LGBTQ2S+ community was an important move, and are united in their frustration with a protest advocating against human rights.

But Smith says the city could try and stop the event and then argue that it’s exercising a “reasonable limit under the Charter.”

“The state can infringe our Charter rights … (if) it has legitimate reason to do that,” they said.

“Generally, the decision about whether something is a Charter breach or not is made by the court, and not a civil authority (such as the City of Vancouver)."

Canada is different from the United States in that it there are limits on free speech. The limits can apply to things such as hate speech, uttering threats and defamation, Smith added.

“I find it really quite disingenuous when people plan to say things in public that are overtly hateful, and then rely on their freedom of expression rights to avoid any kind of consequences,” they said.

Low-level criminal charges, which Smith said police could use to shut down the protest, are frequently issued at protests for progressive issues and should therefore be applied to protests like this one, they argued.

“(The) much smaller types of sanction that could apply, such as disturbing the peace, and mischief, and breach of public order … (are) often what we see left-wing activists charged with when there's a protest that gets out of hand,” Smith said.

But Zwibel disagrees, and says the protest is not a situation in which Charter rights can be reasonably restricted. She argues that if the protest were happening outside a youth health centre, then there might be grounds for officials to step in.

“Let’s say this protest was planned to take place outside of a treatment facility, or a clinic ... where you have basically a captive audience of the people that you're targeting ... (then the government) might be justified to say, ‘Well we're going to create some restrictions (on this protest).’”

Zwibel said it will be up to police to attend and make sure that the protest doesn’t include criminal offences such as hate speech, which is slightly different than what the average person might say constitutes hateful language.

“The Supreme Court of Canada has said that making arguments to remove the rights of marginalized people, that's not hate speech. Hate speech is when (for example) you compare them to disease and vermin, when you call for their extermination.”

Instead of shutting down the protest, Zwibel suggests that community members could organize a counter-protest to show their support for trans youth.

Promotional material for the event claims the protest is “in solidarity with jailed B.C. father.” This is in reference to a man who has been accused of violating court orders to not publicize personal information about his underage son, who is trans. The father is in jail pending a trial on April 12, two days after the protest is planned for.

The father tried to use the courts to stop his trans son from transitioning, but lost the case. To protect the identity and safety of the teenager, a court-ordered publication ban prohibits anyone from publicly naming or publishing identifiable information about those involved in the case.

Smith said that it will be important that no one at the event breaches the publication ban – which could include sharing the name of the father, mother or son involved in the case, or names of the son’s medical providers.

“Publication bans are there to protect vulnerable parties,” they said, adding that they believe the protest is likely meant to draw attention to the case.

"And I suspect it's also a fundraiser,” Smith added.

And, while Zwibel agrees that trans rights aren’t up for debate, she thinks that stopping the protest has the potential to galvanize the organizers into becoming martyrs for free speech. She also notes that by allowing this kind of protest to happen, it also protects the rights of marginalized groups to assemble and voice their needs.

“These protections for free expression, for freedom of peaceful assembly, are protections that have been used by marginalized groups to advance their civil rights. So, if we get rid of them, I think we're all worse off,” she said.