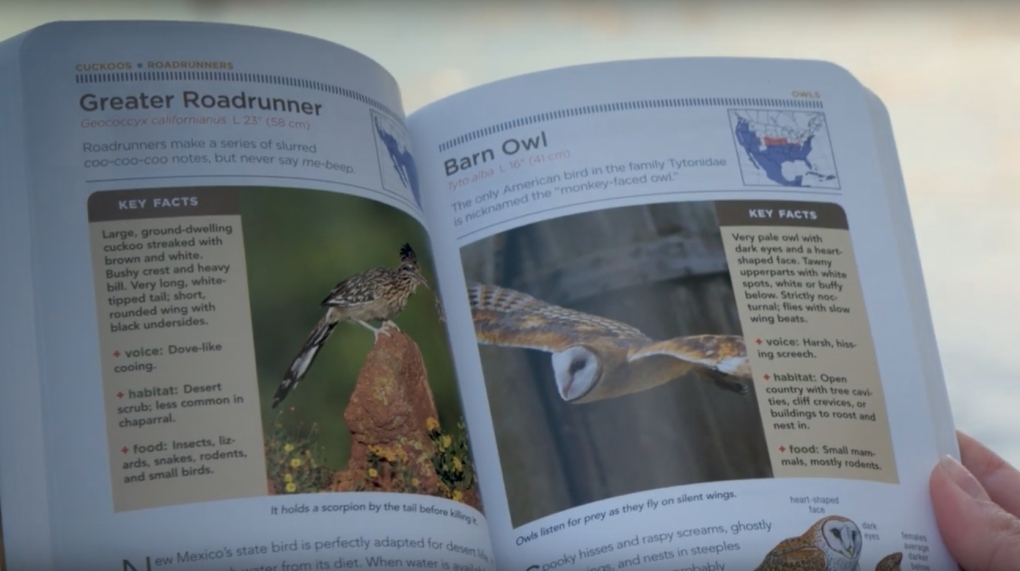 Each pack contains a pair of binoculars in a soft case, a laminated birdwatching guide with tips for beginners, and two guidebooks: "The National Geographic Pocket Guide to the Birds of North America" and "British Columbia Birds: A Folding Pocket Guide to Familiar Species." (FVRL)

Birdwatching in the Fraser Valley is about to be easier and more accessible than ever before.

Starting Monday, 50 "birdwatching backpacks" will be available for the public to check out, for free, from the 25 community libraries that make up the Fraser Valley Regional Library system.

Each pack contains a pair of binoculars in a soft case, a laminated birdwatching guide with tips for beginners, and two guidebooks: "The National Geographic Pocket Guide to the Birds of North America" and "British Columbia Birds: A Folding Pocket Guide to Familiar Species."

FVRL CEO Scott Hargrove told CTV News the backpacks came about because of a request from members of the community.

"We were approached by partners in the community who were passionate about bird watching and wanted to, in this case, donate three birdwatching backpacks to FVRL to loan to their community," Hargrove said.

He said the library and its board loved the idea.

Birdwatching backpacks were a natural fit for the FVRL Playground, a collection of non-traditional library items that aims to promote interest in STEAM - Science, Technology, Engineering, Arts and Math - and improve public literacy in those subjects.

Among the other collections in the FVRL Playground are programmable robots, telescopes, and ukeleles, all of which can be checked out of the library like a book or a movie.

Other Playground items -- including green screens, VR headsets and other robots -- are available in-library only, and more additions are on the way, Hargrove said.

And those experiences are extremely popular.

Hargrove compared the success of Playground items to the Harry Potter book series, which generated some of the highest "hold ratios" -- essentially the number of people trying to read a book compared to the number of copies the library owns -- for any book in the library.

"If we get five holds place on one copy of a book, we try immediately to buy another copy," Hargrove explained. "That's our usual ratio. We try to keep them well below 10-to-one because, of course, that means people have to wait too long … I can tell you that Harry Potter, it was a struggle to keep it at 10-to-one because it was such a popular book."

When telescopes were first added to the FVRL Playground, the library saw 1200 holds placed on 56 available items, Hargrove said. That works out to a hold ratio greater than 20-to-one.

"We're currently standing at 807 holds on the 87 telescopes we have, and we're adding 30 more late this summer because the demand is simply not abating," Hargrove said. "It's incredibly popular. We cannot keep them on the shelves."

He said he anticipates a similar rush of interest for the birdwatching backpacks once they debut.

"I am fully expecting we'll be probably buying another 50 within the next couple weeks. Based on the excitement on social media so far, this is going to be very popular, as every other collection we have in the Playground has been."

FVRL is far from the only library in the Lower Mainland that has been expanding its collection beyond books. In recent years, the Vancouver Public Library has made headlines with its collection of musical instruments for circulation, as well as its recording studios and other creative spaces available to the public.

Hargrove said these types of offerings have always been part of what a local library provides, but the public doesn't always realize it. Programs like the FVRL Playground and its new birdwatching backpacks help to increase that awareness.

"Libraries have always been about reflecting the needs of their communities," Hargrove said. "People who use us, know this, but people who don't often think to themselves, 'oh, they're just about books.' When they see things like this, they go, 'they're not about books,' and they come in."