For most kids, imagining the kind of career they want when they grow up is part of childhood, but for Kimberly Alaric, it seemed a lot of options were out of reach.

The 22-year-old grew up in poverty in a rural Okanagan town with parents who were battling alcoholism and depression. She said she would have never believed she'd be where she is now: halfway through a commercial aviation program and on track to fulfilling her dream.

"It’s an experience that I've never thought being a small town kid in foster care that I'd ever be able to accomplish," Alaric told CTV News.

She said she often felt like a parent to her younger brothers and at one point, they all wounded up in foster care.

She was bounced from home to home for almost two years.

Eventually, she was able to live independently with support from the B.C. Ministry of Children and an Agreement for Young Adults, a provincial program that helps former youths in foster care cover housing and tuition costs.

"I worked two jobs and I finished high school," said Alaric. She credits the program for helping her through that.

Years later, she’d set her sights higher than she ever imagined, after taking her youngest brother to a glider lesson. 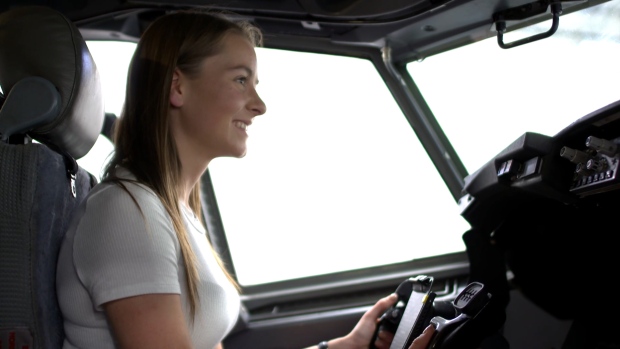 She said she sat on the grass and waited. Then the pilot offered to take her for a cruise.

"As soon as we got airborne, it just clicked. I was like, 'This is what I'm meant to do,'" she said.

A week later, she signed up at a local flight school -- scraping together money to pay -- until Alaric realized she was eligible for help.

She said the ministry reimbursed her for some costs and the AYA program helped her with living expenses and school costs, allowing her to realize her dream.

The 22-year-old, who now lives in Kelowna, is finishing her commercial licence and recently passed a crucial flight test.

“I remember hopping out of the plane and I was shaking, I was so excited,” she said.

In the future, as part of an advisory group of former youth in care, there are plans to speak to high school students to break down the stigma around being in care. She hopes that will lead to more understanding. After that, she hopes to one day get into the captain’s chair and work for a major airline.

Alaric said she is sharing her story to show other kids in care what's possible. Her story is also evidence that determination has no limits.