VANCOUVER -- Spencer Fehrenbacher is glad he chose a state room with a balcony. The small outdoor space is a welcome escape for the 29-year-old from Fort Langley, who’s been quarantined in his cabin aboard the Diamond Princess in the waters off Yokohama, Japan for nine days now.

"There certainly is a lot of opportunity to be stir crazy," said Spencer’s father, Scott Fehrenbacher. "That’s one reason I'm so proud of him. He’s staying even keel when the environment around him is anything but that."

Forty-four new cases of coronavirus were confirmed on board the ship Thursday, bringing the total number of passengers and crew infected to 257.

“Imagine if we had a report that there were 44 cases in your building, and they say don't worry about it, you’re safe,” said the elder Fehrenbacher. "Even 44 cases in Vancouver I think we would all recognize that’s a situation they're uncomfortable with. And yet they continue to be in the same small space day after day, getting more and more positive cases."

A morning announcement from the ship’s captain has given Spencer Fehrenbacher, who has tested negative, some hope.

“Anybody who is 80 years old who was tested and tested negative will have the opportunity to disembark the ship and finish their quarantine in a housing unit managed by the Japanese housing authorities,” Fehrenbacher said in a video recorded for CTV News from quarantine.

Spencer is hopeful younger, healthy passengers like himself will be given the same opportunity in the days to come. His father agrees. “I'm hoping that the people who have tested negative, which my son fortunately is one of them, can get off the ship and continue their best chance to stay healthy,” said Scott Fehrenbacher. “Put yourself in that position where you’re surrounded by one of the biggest hot zones on the planet. You just don’t want to stay there.” 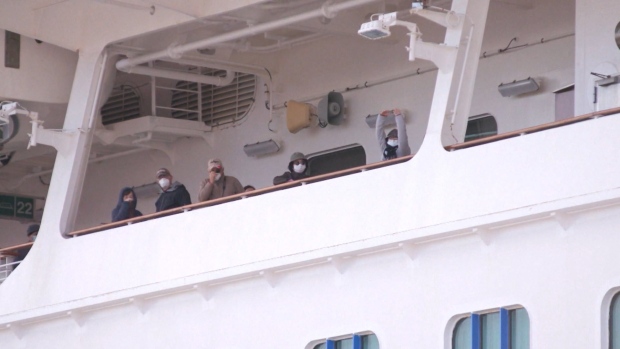 Spencer is trying to stay positive, reading books on the electronic reader his parents gave him for Christmas that his dad calls a godsend. Scott Fehrenbacher says his son’s situation has the entire family back home in Fort Langley stressed and worried, but he’s hoping it will be over soon.

“I'm looking forward to that day I can shave this beard when he gets home,” he said. “We're all growing beards until he gets here, and then we'll have a big party.”