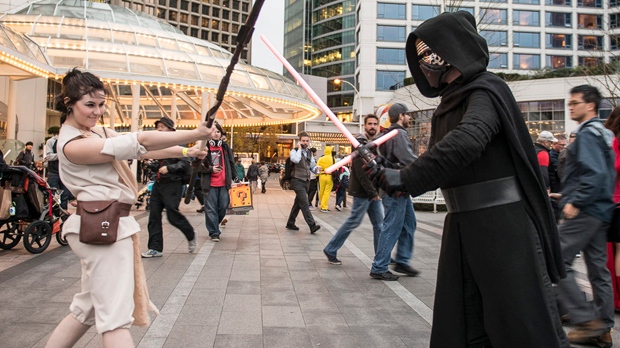 Fan Expo gives fans of sci-fi, fantasy, comics and gaming the chance to dress up, meet stars and like-minded individuals, and generally celebrate of the ever-expanding world of the nerd. (Anil Sharma). Nov. 12, 2016.

If you’re in downtown Vancouver over the weekend and find Star Wars Stormtroopers, Ghostbusters, anime characters, superheroes and villains all flashing before your eyes, don’t panic. No one has slipped LSD into your coffee. You’re just encountering guests on their way to Fan Expo Vancouver.

Held between Nov. 11 to 13 at the Vancouver Convention Centre, Fan Expo gives fans of sci-fi, fantasy, comics and gaming the chance to dress up, meet stars and like-minded individuals, and generally celebrate of the ever-expanding world of the nerd. Once that word would have been considered derogatory. Not any more.

“People take nerdiness as a source of pride now,” explained Vancouver’s Chris Nelson, whose Friday Fan Expo costume was a perfect recreation of Tom Baker’s incarnation of Doctor Who. “On my arm I have a sleeve of tattoos of nerdy things. I literally wear my nerdiness on my sleeve. And I’m proud of it.”

Despite a long list of celebrity appearances, including director Kevin Smith, Tom Felton from the Harry Potter movies, and Back to the Future’s Christopher Lloyd, day one’s biggest stars were the countless fans dressed who’d flexed their creative muscles to dress as their favourite characters.

“You feel accepted when you come here, especially when you dress up,” insisted Jessica Rabbit, AKA Taylor Jackson from Maple Ridge. “I really love Roger Rabbit and I wanted something body positive today so I decided to go for a challenge. Everyone is very supportive of each other. If you cosplay people will tell you that you did a great job. ‘Well so did you! You look amazing!’ It’s a community. Fandom and cosplay are definitely growing. It’s becoming more accepted. Even my family’s talking about it.”

Community is the key word in the world of fandom. The lines between exhibitor and guest, fan and artist are continually blurring. Celebrated comic artist Brian Stelfreeze seemed as excited as many of the attendees nervously approaching his booth.

“Fan Expo is fantastic,” he enthused. “It’s a gathering where all us geeks and nerds can get together and unfurl to our full geekdom with reckless abandon. There’s such camaraderie between everyone. We’re all fanboys and fangirls. I’m a comic book fan who happens to be a comic book artist.”

Working alongside writer Ta-Nehisi Coates, Stelfreeze was responsible for reimagining Marvel’s Black Panther, a character re-launch that was featured in the New York Times and became the biggest selling comic book of 2016.

“We had such a huge response to a multi-cultural comic book that explored not only black and African culture, but also explored characters that are gay and a challenging relationship between a people and a monarchy. People responded so well to that. Then we just went through the American election. You can be encouraged by one thing and then massively discouraged by the other.”

Sci-fi, fantasy and comic book heroes have never been more mainstream or popular. The idea that fans can find comfort in fictional worlds in an increasingly scary real world makes perfect sense to many Expo attendees.

“This is a very safe and welcoming form of escape,” continued Nelson. “Some people might turn to drugs or alcohol. People can escape to fantasy universes, which is something people are seeking in these dark times.”

“This is my happy place,” agreed Jackson. “I can step out of the real world and not feel stressed any more. With what’s going on right now, this is what a lot of us needed.”