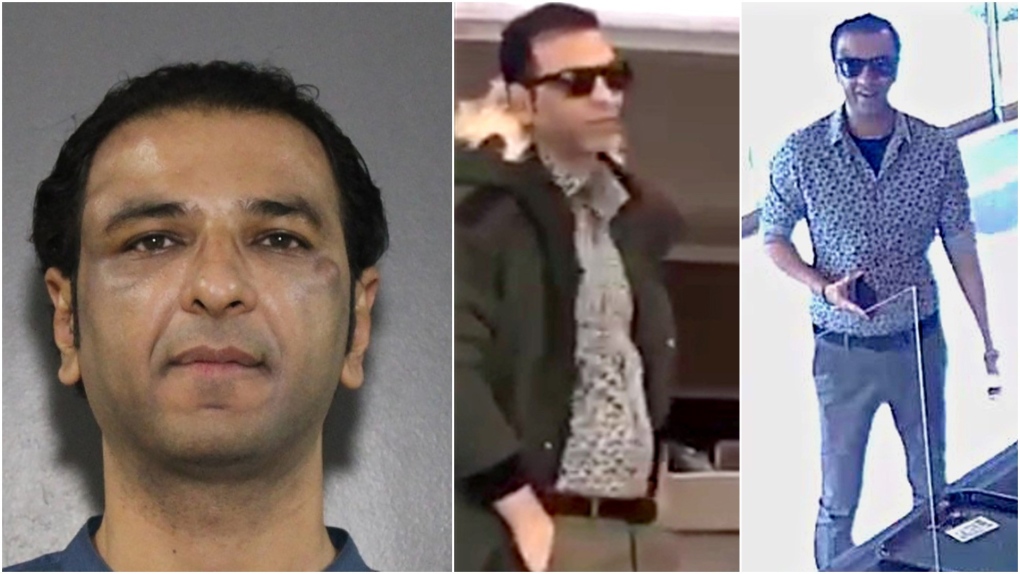 Kashif Ramzan is shown in images provided by Surrey RCMP.

A man who pleaded guilty to two counts of sexual assault posed as a talent agent on Instagram when he contacted the victims, a B.C. judge told the court during a sentencing hearing earlier this month.

Kashif Ramzan learned of his sentence in a New Westminster courtroom on Feb. 9, about six months after entering guilty pleas in the case.

A transcript of Justice Jennifer Duncan's reasoning was posted online last week, and includes details from the investigation dating back to the fall of 2019.

The court heard that Ramzan used social media to find his victims. According to Duncan, Ramzan contacted women on Instagram, describing himself as someone from a casting or talent agency and as a photographer "with influence in the modelling and acting world."

The court heard he used the alias "Reez Javier" when dealing with his victims.

Ramzan used the ruse to set up "auditions" with two women, one in 2019 and the other in 2020, and sexually assaulted them during these meet-ups, court documents say.

"While Mr. Ramzan asked both of the complainants about their comfort level with nudity and love scenes in advance of the auditions, by his plea of guilty he has admitted that he neither had their consent nor had an honest but mistaken belief in their communicated consent to engage in the sexual acts that took place with them," Duncan told the court.

Ahead of the hearing, the Crown sought a sentence of two years, less one day, for each charge, which would be served consecutively.

Ramzan's lawyer suggested a blended sentence that would include six months in jail, followed by two years on a conditional sentence. Alternately, she suggested two six-month sentences, followed by three years' probation.

The court heard Ramzan had a difficult childhood that included physical, emotional and sexual abuse, as well as bullying due to a speech impediment, before he moved from Pakistan to Canada in 2015.

A psychological assessment suggested Ramzan has symptoms of obsessive-compulsive anxiety disorder, and likely had suffered episodes of clinical depression.

"Mr. Ramzan acknowledged the concept of consent is different in Canada, but also believed that Canadian women are more sexually available because of the lack of religious barrier. He thought that if a girl went into a hotel with him, that was consent," the judge summarized of the doctor's analysis.

"(He) admitted that he did not tell his wife what he was doing... He also admitted lying to the complainants about his professional status as a photographer and not providing them with his real name."

Several other factors were weighed during the judge's determination of an appropriate sentence, including a number of reference letters in support of Ramzan, and the fact that his victims were in their late teens when they were assaulted and said they are still dealing with the effects years later.

"Mr. Ramzan set up an elaborate framework of online deceit from which he engaged in a pattern of predatory conduct against young women," Duncan said.

"Mr. Ramzan preyed on his victims’ dreams of success in modelling and acting and lied to them about the influence he had in those spheres."

Ultimately, Ramzan was sentenced to 18 months in prison on Count 1, and two years, less a day, on Count 2. This is to be served concurrently, the judge said, and followed by a three-year probation order.

When Ramzan is out on probation, he will have to report to an officer and have no contact with his victims.

He can have no communication online or in other ways with anyone under the age of 16 unless they're a member of his family, and cannot use a computer or other device to access social media or chat rooms.

Other conditions can be read in the transcript online.

He's also required to provide a DNA sample, and must comply with the federal Sex Offender Information Registration Act for life.

And Ramzan was ordered to pay a $200 victim fine surcharge on each count, and given two months to do so.