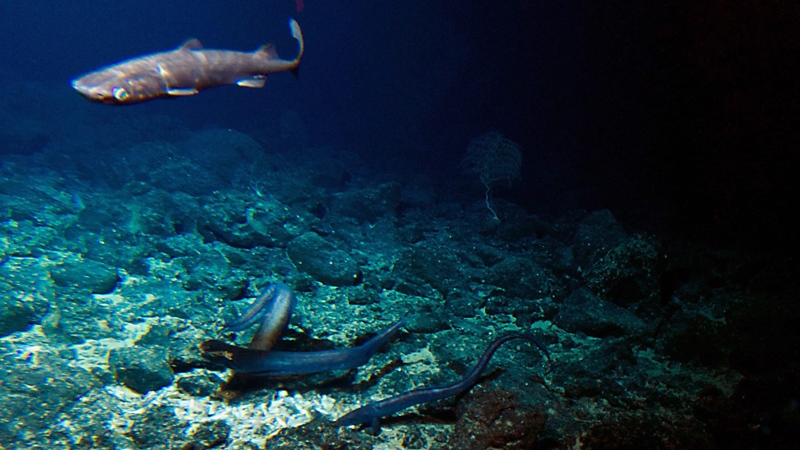 A deep sea shark and several eels are attracted to bait placed at the summit of the Cook seamount, seen from the Pisces V submersible during a dive to the previously unexplored seamount off the coast of Hawaii's Big Island on Sept. 6, 2016. Seamounts are hotspots for marine life because they carry nutrient-rich water upward from the sea floor. (AP Photo/Caleb Jones)

VANCOUVER - The protection and understanding of underwater mountains near the islands of Haida Gwaii in British Columbia will be the focus of a new partnership and expedition involving four groups.

Fisheries and Oceans Canada says it's joining forces with the Haida Nation, Oceana Canada and Ocean Networks Canada to share resources and knowledge about seamounts.

It says seamounts, or underwater mountains, are internationally recognized as highly structured environments that are ideal for coral and sponge growth and as foraging habitat for fish and other marine life.

A news release from Fisheries and Oceans Canada says the groups will spend 16 days in July aboard a state-of-the-art vessel studying three seamounts, which are found in every ocean but are particularly abundant in the Pacific.

Haida Nation president Peter Lantis says he and his members are looking forward to improving management of the culturally, spiritually and economically important seamounts.

Fisheries Minister Dominic LeBlanc says the expedition will study some of Canada's most unique marine ecosystems and that collaboration is essential to finding the best ways to achieve meaningful conservation that benefits both the environment and coastal communities.