Canada Post says it hopes its latest series of stamps will make letter-writers and card-senders think before they drop their envelopes in the mailbox.

The new set, unveiled in Vancouver Monday, shows five whale species that have been recognized as endangered.

The whales featured include orcas. While not all orcas are designated by the Committee on the Status of Endangered Wildlife in Canada, a population in the Northeast Pacific Ocean known as southern resident killer whales does meet the criteria.

Likewise, belugas are featured for their populations in the St. Lawrence Estuary, Cumberland Sound and Ungava Bay.

A population of northern bottlenose whale that lives on the Scotian Shelf is also featured.

Blue whales are another species on the stamps, with populations endangered in both the Atlantic and Pacific ocean.

The North Atlantic right whale is the fifth species.

"Canadian waters are home to a remarkable diversity of whales, with more than 30 species," Canada Post said in a statement.

"Sadly, some whale populations are at risk." 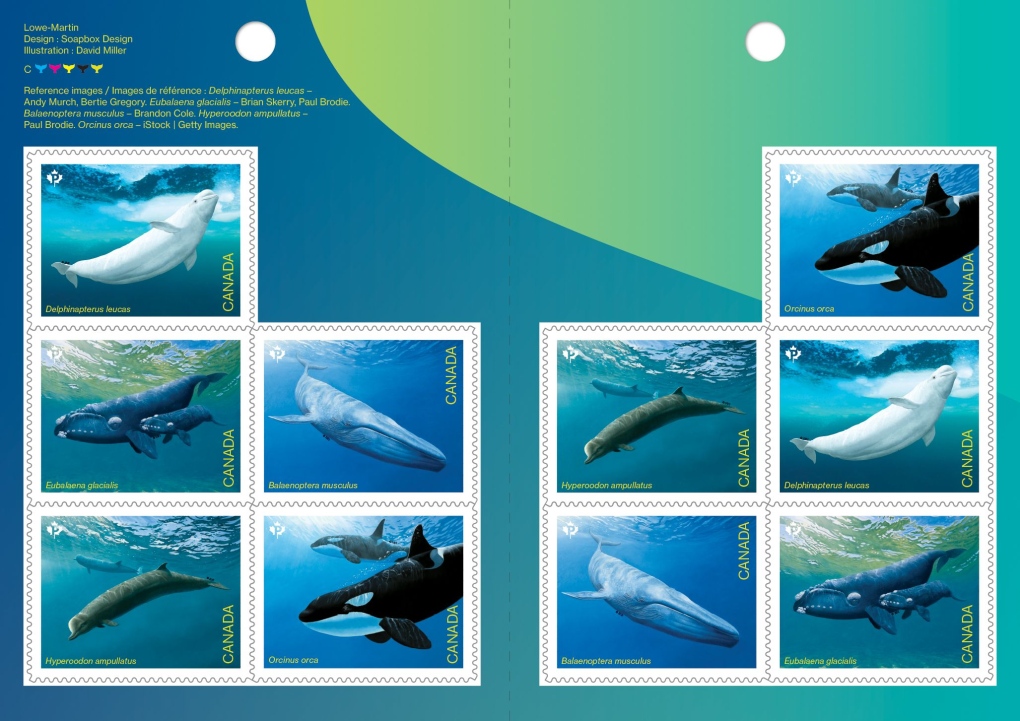 Endangered whales are featured in a new Canada Post stamp series unveiled in Vancouver on Monday, May 16, 2022. (Canada Post)

To blame are pollution and climate change, Canada Post said, as well as ocean noise and ship strikes. Whales are also killed by fishing gear and debris, in which they can be entangled.

A biologist who spoke at the unveiling of the stamps illustrated by artist David Miller said the recognition of these five species as endangered can lead to legal protections.

"It can also lead organizations and people to act voluntarily to stop activities that harm the whales," Dalhousie University professor Hal Whitehead said.

"Thirdly, it raises awareness that we have a problem here, and we need to do something about it."

The stamps will be available at Canada Post locations starting Friday, or can be ordered online.