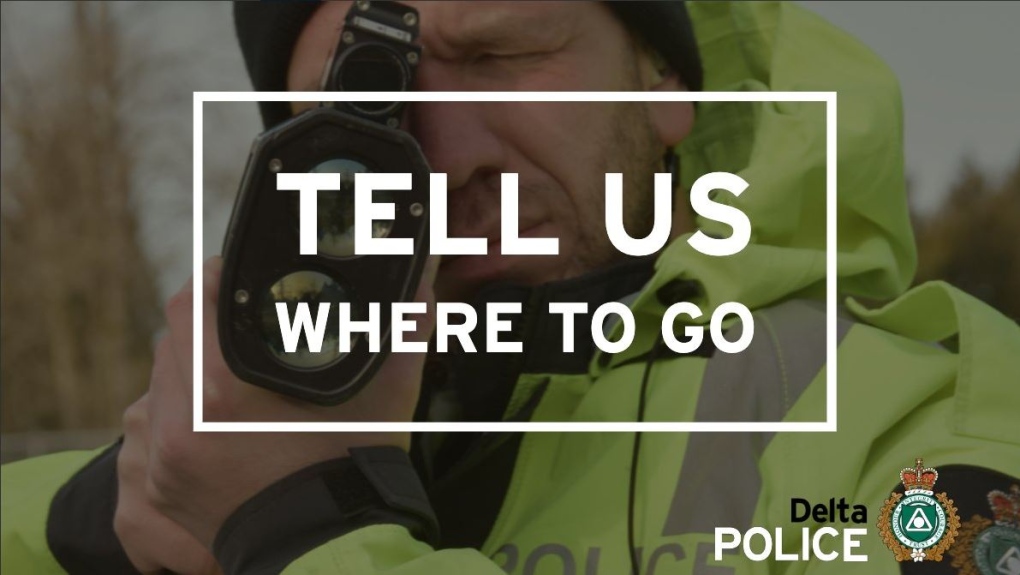 Officers from the Delta Police Department’s traffic unit were checking their social media accounts more than usual Wednesday, but not for the likes or dozens of new followers.

Starting 9 a.m., the force was in full-throttle for their annual #TellUsWhereToGo initiative, where followers on Twitter, Facebook and Instagram were able to leave hot spot tips for the city’s traffic cops.

Spokesperson Cris Leykauf said the campaign allows them to create a deeper connection with locals on and off the road.

“It gives the community a chance to let us know directly where the problem areas are that they’re spotting,” said Leykauf, “and then we’re able to go and respond directly to their concerns.”

“We get a really good response from the community – so it’s all about building that rapport and relationship,” she added.

Officers were posted in many of the municipality’s school zones, nabbing speeders flouting the 30 km/h limit enforced on school days.

The traffic unit tweeted out “Thanks to the follower who told us to go to 116th and 96” to find speeders, complete with a picture of a driver receiving a $247 total ticket for speeding and improperly displaying their green “N”.

“Right now we’ve got about 20 violation tickets or so and additional warnings as well,” said Leykauf.

However, #TellUsWhereToGo day wasn’t all about the tickets doled out by the traffic unit; Const. Ken Usipiuk was on the lookout for “speeding semis and left lane hogs” on B.C. Highway 17 when he spotted a semi-trailer with dangerously wobbling dual tires.

“I had to make a judgment call right there, do we stop right it now or let it get a bit off the highway,” said Usipiuk in a phone interview from his SUV Wednesday afternoon.

He found the wheel nuts keeping the tires secure had loosened, and removed them – by hand – before having the trailer towed away.

Well we were looking for speeding semis on Hwy 17 but spotted one with wobbling dual tires instead. @CstUsipiuk found loose wheel nuts - you don't want that driving in front of you. The driver is now waiting for a tow. pic.twitter.com/mFbIsUIjqG

“Brother, there’s no shortage of work out here,” chuckled Usipiuk. “It doesn’t surprise me anymore.”

The constable also had a somewhat surprising reminder for future vehicular violators getting pulled over:

.@CstUsipiuk has some advice if you get pulled over by police. pic.twitter.com/2hK4nW1yRS