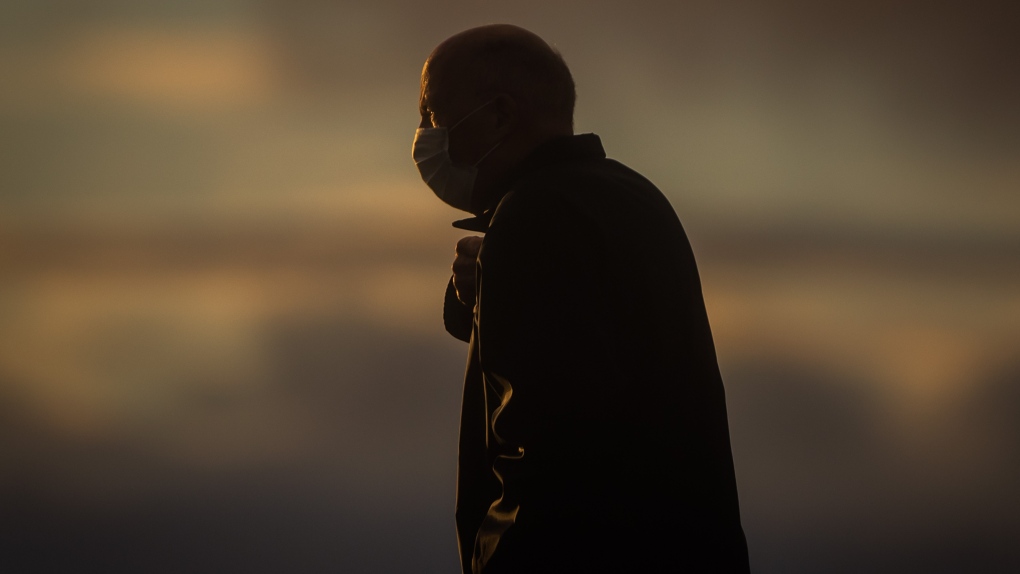 A man wearing a face mask to curb the spread of COVID-19 is silhouetted while walking on Ambleside Pier at sunset, in West Vancouver on Sunday, Jan. 3, 2021. (Darryl Dyck / THE CANADIAN PRESS)

VANCOUVER -- British Columbia has recorded another 625 cases of COVID-19 and eight more deaths from the disease, health officials announced Wednesday.

In a written statement, provincial health officer Dr. Bonnie Henry and B.C. Health Minister Adrian Dix offered their condolences to "everyone who has lost their loved ones during the COVID-19 pandemic."

Wednesday's increase in new cases was higher than the average of 563 cases per day recorded over the past week. The province's rolling seven-day average for new cases has been surging since the end of December after decreasing for several weeks.

B.C.'s number of active cases has still been on the decline, however, thanks to high numbers of recoveries. Some 729 people recovered from COVID-19 between Tuesday and Wednesday, bringing the total number of recoveries to 46,728.

Two new health-care outbreaks have been declared, at Chilliwack General Hospital and Sunnybank Retirement Home, while two others have ended.

Health officials also provided an update on B.C.'s immunization program, confirming 33,665 people have now received a dose of either the Pfizer or Moderna vaccine.

Henry and Dix noted the mental health challenges many people experience at this time of year, and urged people to take care of themselves.

"Let’s remember that no matter how dark the days may be, we are all in this storm together and you are not alone: support is available, if you need it," they said.

"While the number of new cases and those with serious illness is higher than any of us want, there is light ahead, and with each day that we do our part and more people get immunized, that light gets brighter."