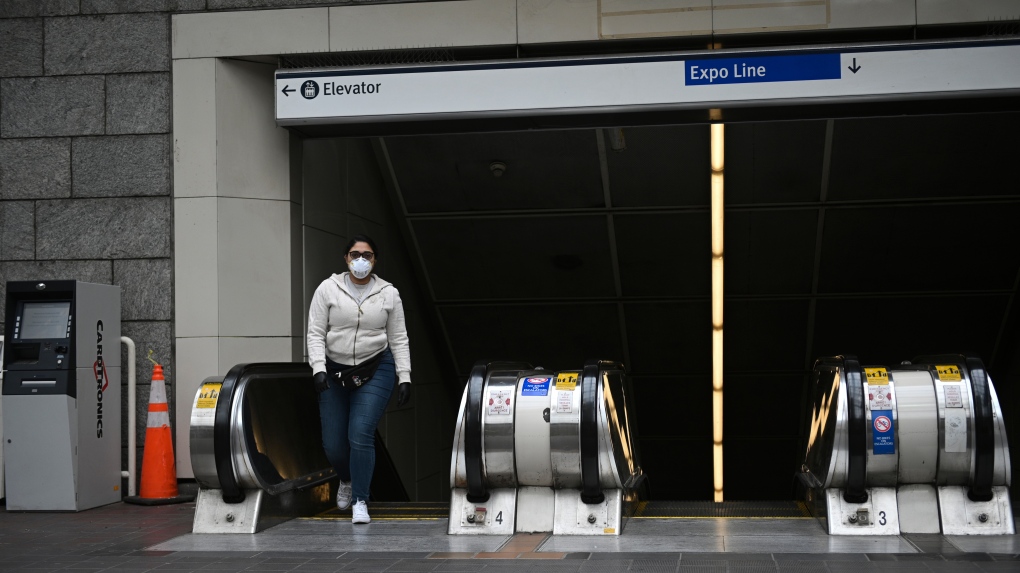 A person wears a face mask as protection against COVID-19 at a Vancouver SkyTrain station. (Shutterstock)
Vancouver -

The B.C. government announced 338 new cases of COVID-19 on Tuesday, pushing the province's rolling weekly average to a three-month low of 451 per day.

The last time the average was that low was Aug. 12, when it was on a rapid increase that began weeks after health officials relaxed many of B.C.'s COVID-19 restrictions.

Recent modelling has indicated the province is getting transmission under control, something provincial health officer Dr. Bonnie Henry has credited, in part, on widespread vaccination.

But she has also warned that progress can be reversed if people don't continue to take precautions over the fall and winter, and asked residents to think small when planning holiday gatherings this year.

Tuesday's update, which was provided in a written statement from the Ministry of Health, also included one coronavirus-related death, well below the province's seven-day average of 7.29 per day.

The number of infectious COVID-19 patients in hospital remained static at 276, but the number in intensive care dropped to 107, down from 116 on Monday.

The unvaccinated continue to represent the majority of cases and hospitalizations, despite making up less than 20 per cent of the provincial population, including those who are under the age of 12 and not yet eligible for vaccination.

People who aren't vaccinated make up 55.7 per cent of cases between Nov. 8-14, and 61.1 per cent of hospitalizations from Nov. 1-14, according to the Ministry of Health.

Earlier in the day, Henry announced B.C.'s first confirmed cases involving AY.4.2, a sublineage of the Delta variant that has been accounting for a growing number of cases in the U.K. So far, officials have said it doesn't appear AY.4.2 is more vaccine-resistant than other strains.

So far, 90.7 per cent of eligible residents have had at least one dose of vaccine, and 86.8 have had two. The government is currently offering third doses to some seniors and other vulnerable groups whose antibody protection may be waning, and will be providing boosters to the rest of the province early next year.

Vaccine approval in children age five to 11 is expected soon, and Henry urged parents to register their children early so they can potentially be vaccinated before the end of the school year.

The Ministry of Health also announced one new health-care facility outbreak, at Ridge Meadows Hospital. One other at the Swedish Assisted Living Resident has ended, leaving 23 active outbreaks across B.C.'s health-care system.