COVID-19 case counts will soon exceed record levels in B.C. if no action is taken by health authorities, a group of local scientists and researchers is warning.

The BC COVID-19 Modelling Group released new data Wednesday, imploring for more public health measures to help curb the spread of the coronavirus. The report shows unvaccinated people could propel COVID-19 case numbers to unprecedented levels, spread the virus to kids who can't be immunized, and overwhelm the health-care system in a matter of months.

The group says its modelling is not a prediction, but an early warning of how the Delta variant could change the pandemic in our province.

"The current vaccine immunity that we have in our population is clearly insufficient," said Dean Karlen, a report co-author and professor of physics at the University of Victoria.

The modelling group is made of data analysts and researchers from B.C. universities and its research is conducted separately from the provincial government's modelling. The last time B.C.'s health ministry released its own modelling data was on June 28.

"In order to avoid a health-care crisis, we do need to take action,” added Karlen. “We need to both reduce transmission but also expand vaccine coverage."

In recent weeks, B.C. has seen a steady increase in case counts. The modelling group says infections have recently doubled about every nine days, or increased by about eight per cent each day. Their research shows growth in all health authorities.

According to the group's report, if there is no change to restrictions and if the province doesn't reach a 90 per cent vaccination rate in the coming months, case counts could skyrocket beyond what B.C. has previously seen. In fact, one projection indicates that if no action is taken at all and the rise in infections continues, Delta cases could reach 11,000 per day in October.

Those cases will only decrease when more of the population has herd immunity from the disease, according to the modellers.

"We see that we have this sort of conclusion of the epidemic, but it's a dramatic conclusion," said Dr. Eric Cytrynbaum in a presentation of the data. 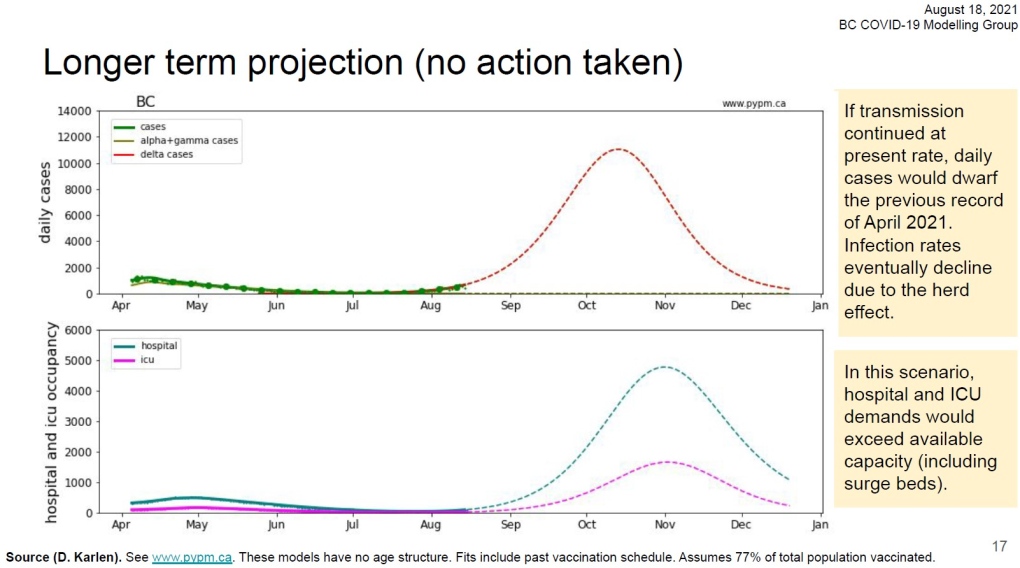 The group warns hospital and intensive care would be overwhelmed, including with surge beds. The researchers also say that while hospitalizations have so far remained relatively low in the fourth wave, there's a delay in those figures compared to case counts.

"When somebody gets sick, it may take a little while before they show up in the hospital. So there's a lag, and then another lag before they end up in the ICU," Cytrynbaum said.

However, the modelling group expects B.C.'s health officials will increase public health measures before that happens.

"What we're looking at is a September, October, November wave that will include those unvaccinated children and it'll include quite large case counts in that age cohort," Cytrynbaum said.

The modelling group says with measures mostly removed in schools and with the higher transmissibility of the Delta variant, exposures in schools will likely be higher this upcoming academic year.

To avoid these projections, the group is calling for both actions to reduce transmission and an aggressive expansion of B.C.'s vaccination program.

The head of the Vancouver Infectious Diseases Centre says – along with more testing than ever before – that includes protecting kids who can't get vaccinated.

"The first step for that is by surrounding them with vaccinated people,” said Dr. Brian Conway. “You can't catch COVID from someone who doesn't have it,"

Conway suggests that all school staff who can be vaccinated should be.

The Green Party wants a return to an indoor mask mandate and for the province to require all health-care, education and public-facing government employees to be fully vaccinated.

For Green Party leader Sonia Fursteanau, it comes down to responsibility towards the unvaccinated.

"You have a responsibility to protect other people around you, particularly if you're working with vulnerable or unvaccinated people," she told CTV News Vancouver.

"Those that haven't gotten around to it, you have to go door-to-door and vaccinate them,” he said. “We should do that."