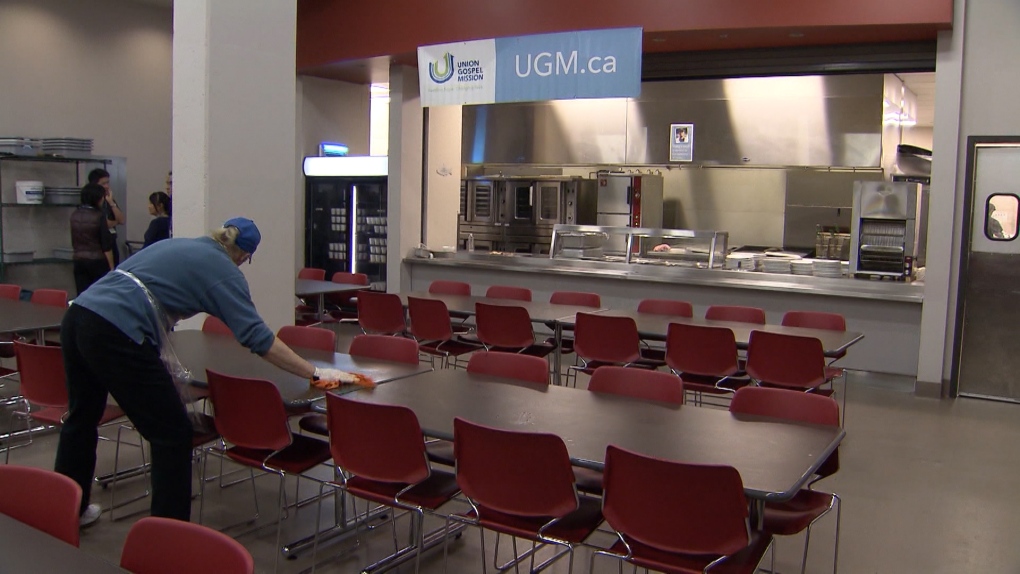 At Union Gospel Mission, staff members have implemented the charity's so-called "pandemic plan" to protect the most vulnerable in the community. (CTV)

VANCOUVER -- Charities and service providers in Metro Vancouver are all bracing for coronavirus impacts.

At Union Gospel Mission, staff members have implemented the charity's so-called "pandemic plan" to protect the most vulnerable in the community.

The plan was first created during the H1N1 influenza scare in 2009 and it has since been updated to respond to the coronavirus.

"We have no reason to believe there's COVID-19 within the homeless community, but if that happens, that would be absolutely devastating," said spokesperson Jeremy Hunka.

Hunka said the plan is being rolled out in phases, the first of which includes creating an emergency management team to coordinate emergency response and increasing sanitation.

If a person within the community tests positive for the virus, UGM would implement its second phase, which would include providing to-go meals and suspending non-essential services.

"The quandary that we're in is at the time when people need help the most, we don’t want to be limiting services," Hunka said. "At the same time, we have to wrestle and weigh that concern with the concern that we don’t want to have too many people in enclosed space all gathering in one area."

He said the homeless population would be more critically hit if someone does become infected with the virus because many already have pre-existing health conditions.

"If they're asked to self-isolate because they're feeling ill, how could they possibly self-isolate if they don’t have a home to go to?" Hunka said. "So, the chances of something really bad happening within the homeless community would be much greater than the rest of us simply because they don’t have the same opportunities to protect themselves."

Similarly, the Greater Vancouver Food Bank is also adjusting how it interacts with its clients during the outbreak.

"We want to make it as easy for people as we can and provide the prepacked bags so that they are outside, they're not potentially in a confined space, and if they are inside, it's not for long. They can get their food and be on their way," Boulter said.

She said the food bank hasn't seen food donations diminish. The food bank prefers monetary donations, she said, because they have greater buying power. However, a bread-supplier that typically donates up to 4,000 loaves a week has temporarily locked down its facility and has stopped giving to food banks.

"We have great freezer capacity and we have some bread in the freezer, but that is a change, so we will see what that turns into," she said.

The food bank is also bracing for changes to how and where clients pick up their food. The organization is anticipating that some churches and neighbourhood houses may be closing over the next couple of weeks.

"That's not going to stop us," Boulter said "If we have to distribute the food out of the back of our truck, we will."

She said as people are panic-buying to stock their own shelves, they should consider pausing and think of those in need.